Webb Institute of Naval Architecture, Glen Cove, N.Y., has announced that a grant has just been received from the National Science Foundation to provide substantial financial assistance in the construction of a hydraulically driven oscillating table. The table will provide both angular and lateral motions over a wide range of frequencies and amplitudes, with any desired phase relationship, and will be used initially for the investigation of dynamic forces and pressures caused by liquid sloshing in tanks of ships carrying liquid cargoes.

There are indications of strong interest in these sloshing loads in the shipbuilding industry, particularly in relation to the problems of design of LNG tankers.

The new oscillating table can also be used for studies of tanktype stablizers. It is expected that it will be applied to student thesis projects, as well as to sponsored research studies.

This new piece of equipment is part of a laboratory facilities improvement program at Webb Institute. A PDP-11/05 Computer, recently donated by the EDO Corp., College Point, N.Y., forms the nucleus for a digital data recording system for the model basin. This permits computer processing of test data expedi- Launching offshore platform, Port of Oakland.

n tiously and accurately, in particular to make spectral analyses of wave response records for tests in irregular seas. The National Science Foundation also provided financial assistance for this system, as well as for planned improvements in the tank drive equipment and a new force and motion dynamometer for the carriage.

The Webb Center for Maritime Studies is now in a position to carry out a much wider range of experimental studies of motions and loads on ships, floating platforms, mooring systems and internal tanks, either in regular waves or in irregular waves having any specified spectrum. Other financial assistance for tank instrumentation for studies relating to general specific problems of safety of ships at sea has been given by the Life Saving Benevolent Association of New York. 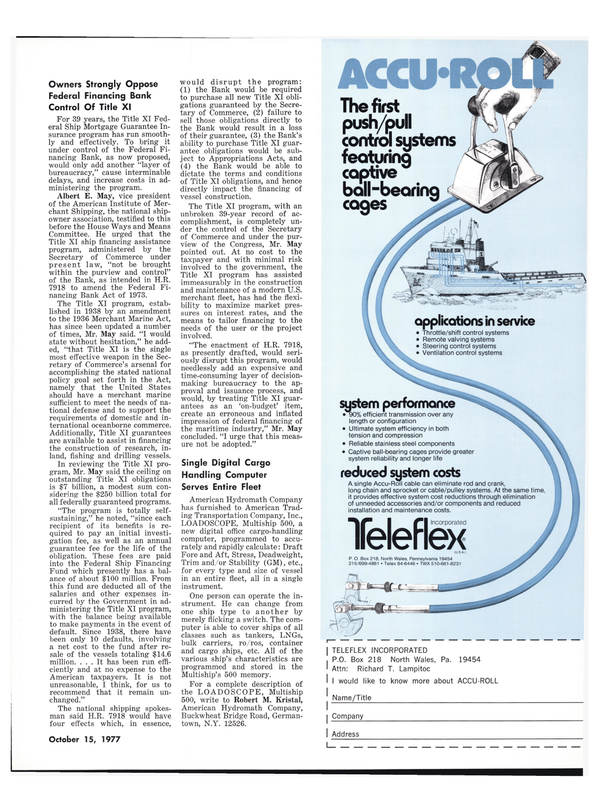