On December 12, 1973, the first of a series of 43,300-deadweight-ton bulk carriers, the Althea, was launched at Eleusis Shipyards S.A. This is the biggest ship ever built in Greece.

Eleusis Shipyards commenced operations in August 1969, and since then the yard has progressed rapidly. The facilities have been extended, and the equipment has been improved by the acquisition of the most modern niachinery.

In the first phase of its development, the yard confined itself to repair and conversion work, and its business in these fields expanded.

Last year, the order book for repairs and conversions grew at a particularly fast pace: between January 1 and November 30, 1973, repairs were carried out on 148 vessels with a total tonnage of 2,153,000 grt.

On September 1, 1971, Eleusis Shipyards entered the ship construction stage, and on June 8, 1972, the first ship was launched— the 5,900-dwt Okeanis. Since then, Eleusis Shipyards has been operating as a fully integrated yard, with newbuilding on its stocks as well as repair and conversion work.

The Althea is a bulk carrier of 43,300 deadweight tons. She has an approximate overall length of 673 feet, extreme breadth of 89 feet, a trial speed of about 15.8 knots, and main engine developing 14,200 bhp. She is built for the bulk transportation of dry cargoes (ore, coal, grain, etc.) and incorporates all the design features of a self-loading vessel. She will have air-conditioned accommodations for a crew of 43. The ship has been built in conformity with the American Bureau of Shipping and under its supervision, and she flies the Greek flag. 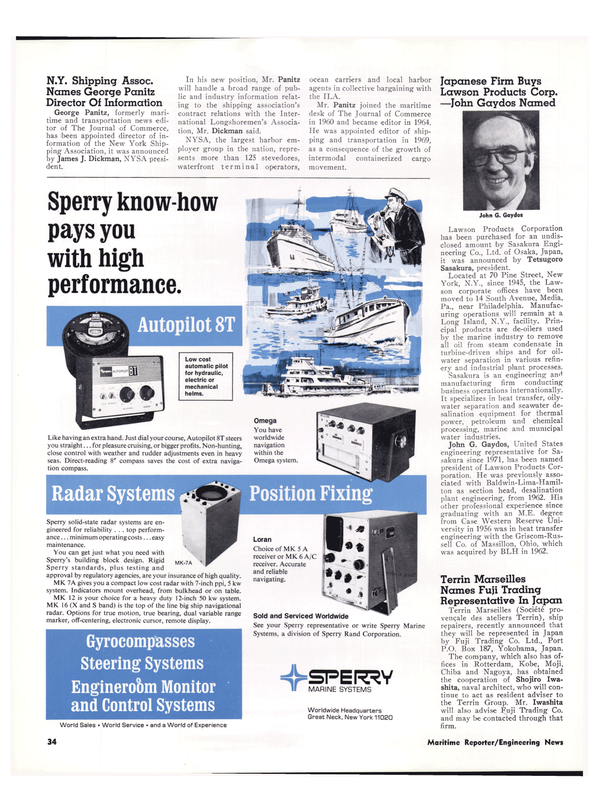