Design of the New Zapata rigs is an outgrowth of an in-house research and development program in which Friede & Goldman, Inc.

spent several years designing and model testing a highly advanced new type of semisubmersible drilling unit. Successful results of the research and development program, backed by the experience of designing more than 100 offshore drilling units, led to Friede & Goldman's design of the new Pacesetter series (Pacesetters I, II and III) of self- propelled semisuhmersi'bles for the Western Company of North America, and to the SS-2000 series for Zapata Off-Shore Company.

The new Zapata SS-2000 rigs, scheduled for delivery beginning in the spring of 1975, are distinctive by their twin lower hulls of catamaran or ship-like configuration which provide superior performance characteristics, particularly in the dampening effect when subjected to surge motions. The 260-footlong 200-foot-beam drilling platform is supported by six cylindrical stability caissons. Normal drilling draft is 45 feet, with a displacement of 16,750 long tons. Each unit will have a variable deck load capacity of 2,000 tons and quarters accommodations for 90 persons.

The units will contain highcapacity drilling equipment capable of drilling to depths of more than 25,000 feet. They will have a design capability for drilling in 2,000 feet of water. Design of the rigs meets all U.S. Coast Guard and American Bureau of Shipping standards. 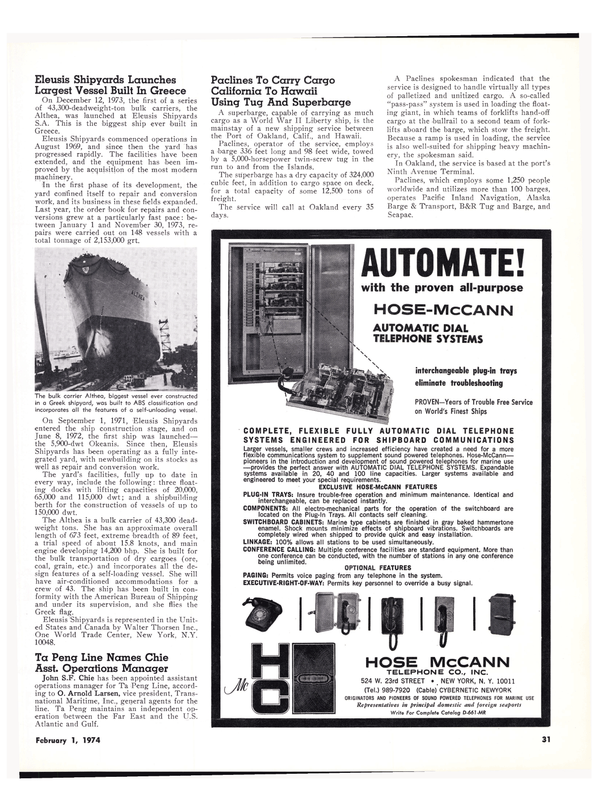