The first vessel 'built by the company's Seatrain Shipbuilding subsidiary at the former Brooklyn Navy Yard, and the largest commercial ship ever ibuilt in the United States, the Brooklyn will be leased by General Electric to a corporation which has a 25-year time 'charter to American Petrofina, Inc., a Dallas, Texas-based oil company.

Joseph Kahn, Seatrain chairman, said as soon as an anticipated favorable tax ruling is received, the proceeds will be released from escrow and applied to make the company current in its term bank debt.

The leasing of the Brooklyn brings together for the first time the country's largest leasing company— which is approaching the $1.5-ibillion mark in original cost of equipment on lease—and Seatrain Shipbuilding Corporation, builder of America's largest Commercial vessels.

John F. Duncan, vice president of GE Credit, called the Brooklyn a major long-term weapon in combating the energy crisis. With a cruising range of 15,000 miles, thenew supertanker will carry 1.6 million barrels of oil on one voyage, with "major savings in cost, fuel, and time, as compared with using perhaps half a dozen ships to carry the same amount." Seatrain Shipbuilding is currently building a sister tanker, the Williamsburgh, scheduled for delivery in mid-1974, and a third sister ship, the Stuyvesant, scheduled for completion in 1975. Arrangements have been completed for construction of a-iojirth vessel which will begin buildirig as soon as the Williamsburgh is floated out of t h ^ r y d o c k . 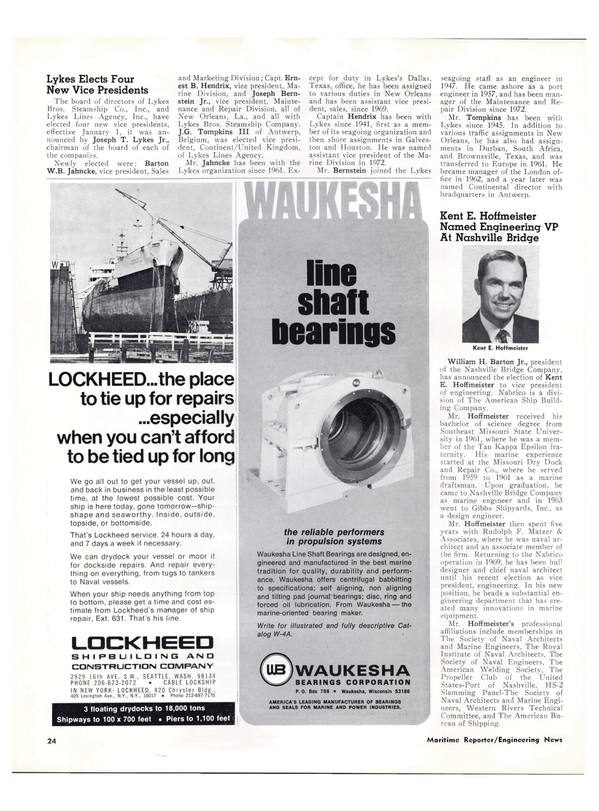