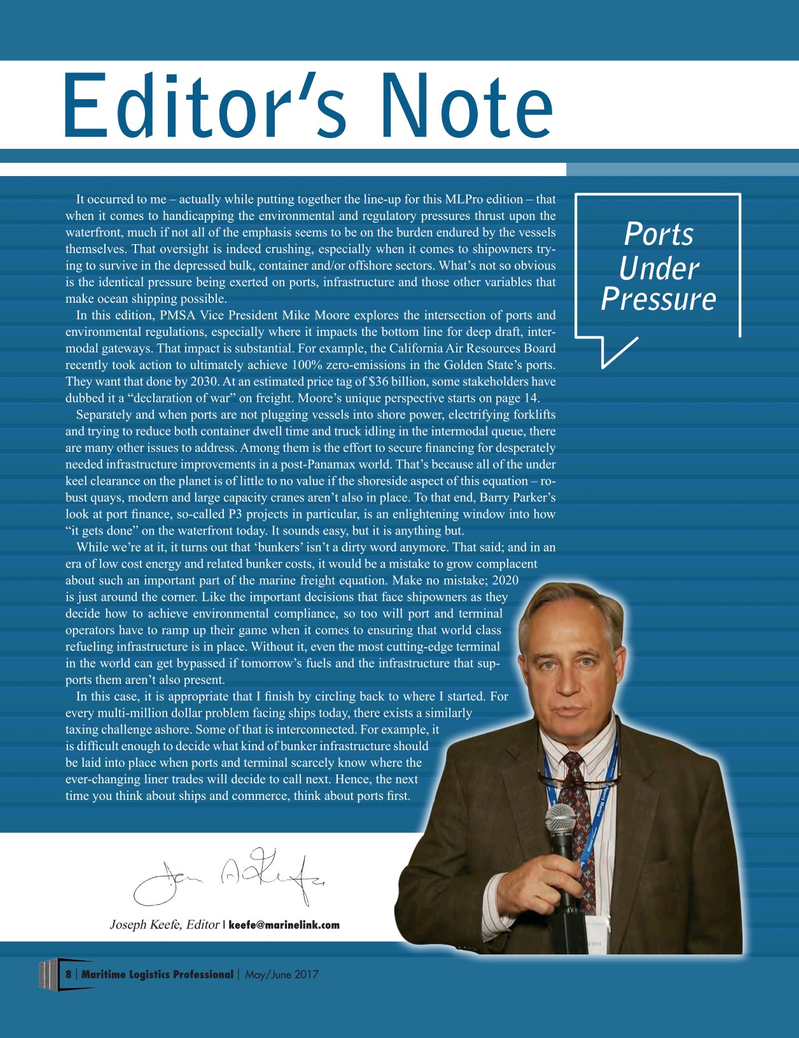 It occurred to me – actually while putting together the line-up for this MLPro edition – that when it comes to handicapping the environmental and regulatory pressures thrust upon the waterfront, much if not all of the emphasis seems to be on the burden endured by the vessels

Ports themselves. That oversight is indeed crushing, especially when it comes to shipowners try- ing to survive in the depressed bulk, container and/or offshore sectors. What’s not so obvious

Under is the identical pressure being exerted on ports, infrastructure and those other variables that make ocean shipping possible.

In this edition, PMSA Vice President Mike Moore explores the intersection of ports and environmental regulations, especially where it impacts the bottom line for deep draft, inter- modal gateways. That impact is substantial. For example, the California Air Resources Board recently took action to ultimately achieve 100% zero-emissions in the Golden State’s ports.

They want that done by 2030. At an estimated price tag of $36 billion, some stakeholders have dubbed it a “declaration of war” on freight. Moore’s unique perspective starts on page 14.

Separately and when ports are not plugging vessels into shore power, electrifying forklifts and trying to reduce both container dwell time and truck idling in the intermodal queue, there are many other issues to address. Among them is the effort to secure fnancing for desperately needed infrastructure improvements in a post-Panamax world. That’s because all of the under keel clearance on the planet is of little to no value if the shoreside aspect of this equation – ro- bust quays, modern and large capacity cranes aren’t also in place. To that end, Barry Parker’s look at port fnance, so-called P3 projects in particular, is an enlightening window into how “it gets done” on the waterfront today. It sounds easy, but it is anything but.

While we’re at it, it turns out that ‘bunkers’ isn’t a dirty word anymore. That said; and in an era of low cost energy and related bunker costs, it would be a mistake to grow complacent about such an important part of the marine freight equation. Make no mistake; 2020 is just around the corner. Like the important decisions that face shipowners as they decide how to achieve environmental compliance, so too will port and terminal operators have to ramp up their game when it comes to ensuring that world class refueling infrastructure is in place. Without it, even the most cutting-edge terminal in the world can get bypassed if tomorrow’s fuels and the infrastructure that sup- ports them aren’t also present.

In this case, it is appropriate that I fnish by circling back to where I started. For every multi-million dollar problem facing ships today, there exists a similarly taxing challenge ashore. Some of that is interconnected. For example, it is diffcult enough to decide what kind of bunker infrastructure should be laid into place when ports and terminal scarcely know where the ever-changing liner trades will decide to call next. Hence, the next time you think about ships and commerce, think about ports frst.