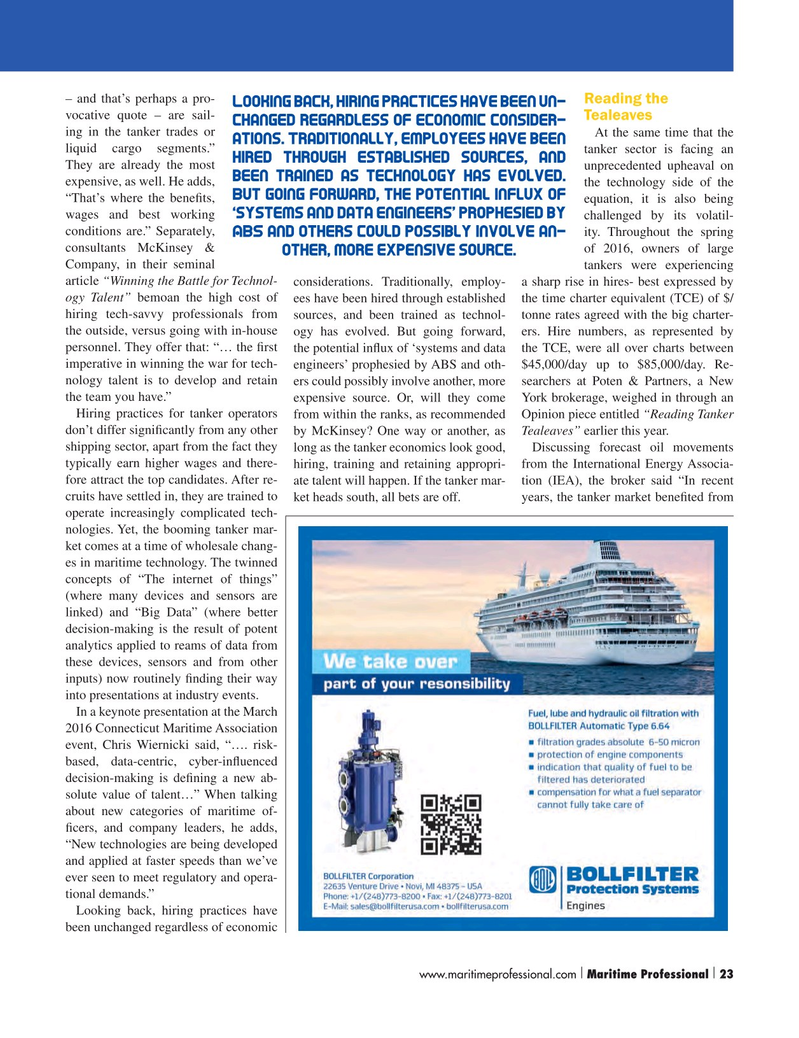 – and that’s perhaps a pro-

Looking back, hiring practices have been un- vocative quote – are sail-

Tealeaves changed regardless of economic consider- ing in the tanker trades or At the same time that the ations. Traditionally, employees have been liquid cargo segments.” tanker sector is facing an hired through established sources, and

They are already the most unprecedented upheaval on been trained as technology has evolved. expensive, as well. He adds, the technology side of the

But going forward, the potential influx of “That’s where the bene? ts, equation, it is also being ‘systems and data engineers’ prophesied by wages and best working challenged by its volatil- conditions are.” Separately, ity. Throughout the spring

ABS and others could possibly involve an- consultants McKinsey & of 2016, owners of large other, more expensive source.

Company, in their seminal tankers were experiencing article “Winning the Battle for Technol- considerations. Traditionally, employ- a sharp rise in hires- best expressed by ogy Talent” bemoan the high cost of ees have been hired through established the time charter equivalent (TCE) of $/ hiring tech-savvy professionals from sources, and been trained as technol- tonne rates agreed with the big charter- the outside, versus going with in-house ogy has evolved. But going forward, ers. Hire numbers, as represented by personnel. They offer that: “… the ? rst the potential in? ux of ‘systems and data the TCE, were all over charts between imperative in winning the war for tech- engineers’ prophesied by ABS and oth- $45,000/day up to $85,000/day. Re- nology talent is to develop and retain ers could possibly involve another, more searchers at Poten & Partners, a New the team you have.” expensive source. Or, will they come York brokerage, weighed in through an

Hiring practices for tanker operators from within the ranks, as recommended Opinion piece entitled “Reading Tanker don’t differ signi? cantly from any other by McKinsey? One way or another, as Tealeaves” earlier this year. shipping sector, apart from the fact they long as the tanker economics look good, Discussing forecast oil movements typically earn higher wages and there- hiring, training and retaining appropri- from the International Energy Associa- fore attract the top candidates. After re- ate talent will happen. If the tanker mar- tion (IEA), the broker said “In recent cruits have settled in, they are trained to ket heads south, all bets are off. years, the tanker market bene? ted from operate increasingly complicated tech- nologies. Yet, the booming tanker mar- ket comes at a time of wholesale chang- es in maritime technology. The twinned concepts of “The internet of things” (where many devices and sensors are linked) and “Big Data” (where better decision-making is the result of potent analytics applied to reams of data from these devices, sensors and from other inputs) now routinely ? nding their way into presentations at industry events.

In a keynote presentation at the March 2016 Connecticut Maritime Association event, Chris Wiernicki said, “…. risk- based, data-centric, cyber-in? uenced decision-making is de? ning a new ab- solute value of talent…” When talking about new categories of maritime of- ? cers, and company leaders, he adds, “New technologies are being developed and applied at faster speeds than we’ve ever seen to meet regulatory and opera- tional demands.”

Looking back, hiring practices have been unchanged regardless of economic www.maritimeprofessional.com Maritime Professional 23| |