The 2015 Baltic ECA requirements make the increase in marine casualties inevitable. You can do something about it.

The march towards cleaner air in coastal areas is well underway. For example, the International Maritime Organization (IMO) amended the International Convention for the Prevention of Pollution from Ships (MARPOL) designating specific portions of U.S., Canadian and French waters as Emission Control Areas (ECA) in 2010. Since August 2012, the use of fuel oil which does not exceed 1.0% sulfur has been required. Ramping up the pressure even further, the limit drops to 0.1% sulfur in January of 2015. At this point, the use of distillate fuel will mandatory within the ECA.
Separately, the State of California – typically a leader in green initiatives – has for almost five years required ships to use distillate fuel within 24 miles of the coastline. As with many statutes created to improve life at one end of the spectrum, the requirements also come with unintended consequences. A well-documented increase in casualties involving Loss of Propulsion (LOP) has dogged the policy in California. To date, none of these incidents has resulted in a collision, allision or grounding. The myriad reasons for this trend, to one extent or another, all center around the switching from heavy fuel oil to distillates as the vessels enter the Golden State’s local ‘ECA.’
What operators do in the face of the coming environmental storm can make all the difference. Failing that, the policy of ECA’s will certainly clean up the air that we breathe, but at the same time, (possibly) polluting coastal waters. That said; you have options.

A Change of Course
One way to limit the need to burn more expensive distillates is to simply change the routing of the vessels involved. The use of a great circle course until the ship is directly east or west of its destination, and then proceeding straight into that port using a rhumbline is one way to approach the problem. Unfortunately, the cumulative impact of changing routes will add more than one million miles to the collective voyages of these vessels. But while burning less desirable HFO during those longer routes, the net benefit to the bottom line is completely negated.
Unlike ships enroute to the United States, traffic headed for Northern Europe will have to transit the English Channel. And, unlike arrival into the United States, where ships are typically still in open ocean after the switchover, these Channel and North Sea bound ships will be in close proximity to the European coastlines and considerable numbers of oil rigs. The increased risk is obvious in the event of an LOP situation in this scenario.

Loss of Propulsion – Unintended Consequences
California’s Loss of Propulsion (LOP) incidents averaged 23 incidents per year on HFO prior to 2009. Following the enactment regulations requiring distillate fuel use there, that number jumped almost 200 percent. Extrapolating this data to other places where similar regulations will soon take effect provides some chilling conclusions. For example, the potential number of LOP incidents in the Gulf of Mexico could increase by 164 – or one every other day based on current traffic levels. All of this could occur within shouting distance of as many as 4,000 shallow water oil rigs, 800 manned oil rigs and 94 deepwater oil rigs in the Gulf of Mexico.
The UK Maritime & Coastguard Agency counts as many as 35,581 annual transits in the South West Bound Lane in 2013. During the same timeframe, the Northeast Bound Lane experienced similar levels of traffic. Again using a linear comparison to California traffic and LOP’s, the real possibility of more than 600 LOP events occurring annually exists, with as many as 200 of those events caused by distillate fuel. Given the North Sea’s heavy mix of offshore and gas business, 2015 could bring significant safety issues to the area. As it turns out, neither the U.S. Environmental Protection Agency nor the U.S. Coast Guard conducted risk assessments in conjunction with the evolution of the coming regulations.
There are five different types of loss of propulsion incidents that now occur in California waters. But, beyond the numbers, trends, and (disturbing) possibilities, those operators looking to be impacted by the coming ECA’s have the benefit of taking advantage of California’s learning curve, by paying strict attention to Table 1.

Scrubbers to the Rescue?
Scrubber technology, for many years, has been touted as the panacea for air emissions. Alternate compliance stack gas scrubbers cost about USD 5 to 10 million to install on existing ships for the main propulsion engine(s) and auxiliary generators. Capable of reducing sulfur oxide (SOX) when the less costly HFO is used, it has also been estimated that fuel consumption can increase using the scrubbers by 1.5% to 5%. That can add up. So can the cost of chemicals such as caustic soda, which can amount to as much as 20 tons per week while in the ECA. Beyond this, the typical operation will also consume fresh water if the system is a closed loop scrubber, accentuating the need for robust evaporators to handle the extra demand for fresh water.
Hazardous effluent must be disposed of by either bringing the material to port or releasing it into ocean. An open loop scrubber system may emit wash water with arsenic, copper, lead, nickel and selenium. Clearly, this option comes with its own issues, something each and every operator has to assess in terms of their own situation, when preparing for stricter air emission standards.

Dial in the Weather
Prevailing weather conditions must be taken into consideration when transiting any ECA. That’s because both North Atlantic and North Pacific winter sea states can and do exceed a consistent height of  4 meters with accompanying winds in excess of 25 knots. Engine loads increase in rough seas, which in turn forces the vessel to reduce load on the engine (reducing fuel) and slowing the ship even more. Extra wear will appear on the engine components on vessels which fail to act accordingly, further increasing the likelihood of a LOP. While burning distillate fuel inside an ECA, the potential for an engine casualty increases exponentially.

Alternate Compliance
Currently, ECA regulations related to ECAs list two options for achieving compliance. These include the use of exhaust gas scrubbers (allowing the use of HFO) and secondly, switching to lower sulfur distillates within the ECA. Each method carries its own baggage. Table 2 lays out the implications.

Scrubbers and Distillate Fuels: what is the alternative?
In 2009, the California Air Resources Board regulations related to emissions from ships operating within 24 miles of the California coast came into effect with the intent of protecting the public health and reducing emission related health issues. When data for the original Emission Control Area (ECAs) was compiled, the benchmark used ship “hull” speed. Aboard my former ship, consumption at “hull speed” was around 150 tons of Heavy Fuel Oil (HFO) per day. With the price of fuel increasing so quickly over the last five years, ship operators conducted experiments using the concept “slow speed steaming”. What typically was a five ship service was increased to a six ship service, meaning that at the slower speed, six ships provide the same scheduled service as five.
One European ECA study reports findings that suggest that HFO consumption can be reduced by one-third by simply reducing speed by just proceeding 2-3 knots. Beyond this and more to the point, emissions decreased substantially across the board in conjunction with the reduction in speed. In other words, slowing a ship 2-3 knots while using low sulfur heavy fuel oil will cut carbon emissions better than a ship using distillate fuel at full speed. The ship proceeding at slower speed will also have lower NOX emissions than the ship using distillate. Particulate matter emissions will be the same for both described instances. While SOX emissions will be lower for the ship using distillates, the slower ship will have less NOX emissions which offset the SOX emissions and its effect on the environment.
Finally, there is cost. Using low sulfur heavy fuel oil – an ultra low sulfur version is now said to be available in Europe – is less expensive than distillate, not to mention the cost of installing a scrubber or exhaust gas recirculation apparatus. And, let’s not forget the more forgiving nature of HFO versus distillate. Ships will have fewer LOP’s which could result in a catastrophic allision, collision or grounding. At the end of the day, cleaner air should not come at the expense of dirtier water. And, it doesn’t have to.

(As published in the 3Q 2014 edition of Maritime Professional - www.maritimeprofessional.com) 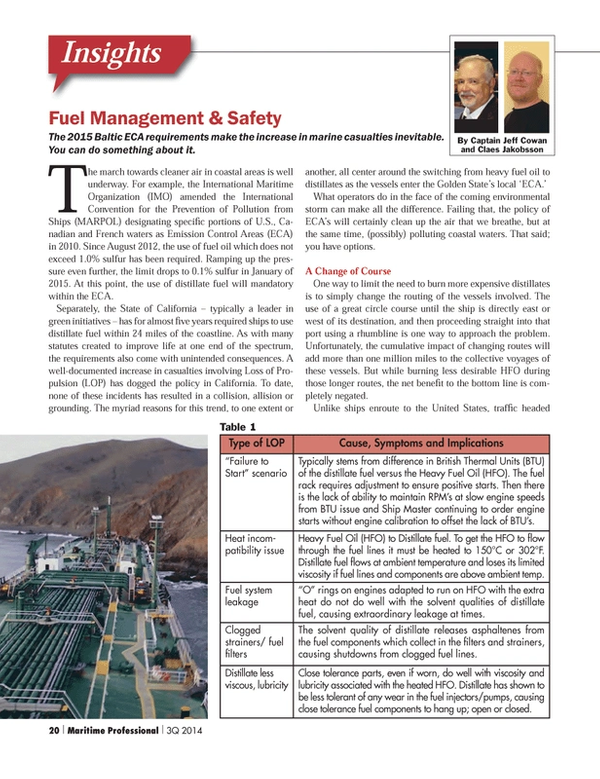