A look at the finances of one of North America’s most interesting offshore services companies and its formula for success.

Harvey Gulf International’s steady movement towards a dominant position among U.S. flagged offshore support and towing operators has arguably been supported by a well constructed financial structure. On that score, it would seem that credit ratings and risk analyst Moody’s would, for the most part, agree. Nevertheless, the company’s ongoing transition from towing to an offshore services provider, though exhibiting great foresight, has not been without financial risk. Likewise, bumps in the road (each with costs attached) will accompany its moves into the realm of LNG (for propulsion, and as a fuel supplier); still an emerging technology.

Looking Back
In 2008, Harvey Gulf’s fleet stood at 15 vessels. Through the intervention of Fortis Merchant Bank, the company – by then run by the grandsons of the company’s founder – was able to simplify its ownership structure at a time when the business needed to grow. This occurred with the backing of a New York based private equity investor with a specialty in leveraged buyouts – The Jordan Company. According to news release at the time, Shane Guidry and Shawn Guidry would retain a 24% interest in the company, after what was described as $500 million transaction that closed only weeks before that year’s financial melt-down. In 2009, the now recapitalized Harvey Gulf announced that it would be committing $200 million to vessel construction and acquisition of existing vessels. In Q3 2012, Harvey Gulf closed on the acquisition of nine OSV’s from Bee Mar, a unit of Bollinger Shipyards, in a deal valued at $243 million. Construction of state-of-the-art dual fueled OSV’s was also beginning at this time.

Fast Forward
Five years after the original PE investment, the capital needs are even greater. By mid 2013 and following an announced acquisition of 11 vessels from Gulf Offshore Logistics (GOL), Harvey Gulf’s fleet now totals 35 vessels (27 support vessels and eight towing vessels). On order are nine vessels (including six dual fueled OSV’s and two deepsea construction vessels (and another which was just delivered). As a private company, Harvey Gulf’s financials are not published, but an informed guess of its capital commitments (including vessels on order, the acquisition of GOL boats, and plans to create a bunkering hub at Port Fourchon) yields roughly $680 million. In perspective, a very rough estimate of its balance sheet size (based on comparison with a comparable company’s financials) yields about $1.44 billion, including the GOL acquisition.
In late Spring, 2013, Harvey Gulf took two important steps, refinancing $534 million of  its outstanding bank debt (along with funds to pay for the GOL vessels) into a pair of new loans totaling $750 million (Term Loan “A” – $150 million and the all-important Term Loan “B” – $600 million), complemented by a $250 million Revolver. Harvey Gulf, previously un-rated, received a Corporate Family Rating of B1 from Moody’s, a leading rating agency. Shane Guidry, Harvey Gulf’s CEO, explained the evolution of the deal: “We strategically re-worked the facility to include a Term Loan A tranche, and executed the debt facility in the most efficient way possible while maintaining a low cost of borrowing.” Harvey’s CFO, Jeff Henderson, added: “We closed our debt facility during a time when many other refinancing plans failed to execute due to the extreme volatility in the marketplace.”

Handicapping the Deal
According to debt traders who spoke to Maritime Professional, “Term Loan B structures, which grew out of the high yield market, are very popular.” From the lender side, the loans can be sold onward to hedge funds, or put into packages such as CLOs (who offer portfolios containing slivers of various transport debt packed together to their institutional customers). Investors in the Harvey Term Loan B include Sun Trust, Nuveen (a fund packager), Principal Finance Group and money manager Black-Rock. One trader explained to MarPro that audited financial statements and a credit rating are prerequisites for the debt; as banking has shifted, the universe of debt holders now moves beyond traditional “relationship” banks (or those that would have formed traditional lending syndicates). Harvey Gulf’s Henderson told Maritime Professional, “The credit rating was obtained in connection with the Term Loan B tranche.”
The attractiveness of the structure comes from terms that are better than that offered by traditional bank lenders, including “covenant lite” structures, which may enable borrowers to avoid compliance with measures such as loan-to-value, or maximum net leverage ratios. These are floating rate loans (here 450 basis points margin over Libor), which, in a rising rate environment, generates considerable investor demand. Issuers also like them, the loans often come with softer call protection than traditional bonds. In the case of Harvey, the “B” loan can be called at 102% in Year 1 and 101% in Year 2. Their minimal amortization is another attractive feature – here, it is 1% of principal value per year (contrasted with a typical bank loan; The “A” loan here amortizes down to a 25% balloon at the end of five years). The debt issue is being led by Merrill Lynch Bank America.
The recent Marine Money conference in New York provided some insights into the trading of loans for maritime companies, an important tool for banks managing exposures to different companies and sectors. Ms. Jennifer Box, Senior Vice President at Oaktree Capital (an active player in deep-sea ship finance) offered that: “Trading begets more trading … you’ll see that for companies that have been historically followed where people know the story … you’ll see one trade … and then there’s a market.” She said “There’s a whole universe of shipping loans, for partially private companies and well known companies, where banks just haven’t seen a trade happen yet,” adding that “We’ve only tipped the iceberg in terms of what could happen.” From the traders’ angle, they can benefit, selling their debt at a profit, if a company’s prospects improve (and its yield is reduced, based on less perceived risk).

Looking Ahead
For Harvey Gulf, as it starts firing on all cylinders (presumably, burning LNG), its credit rating may improve from the B1, which is in the “Speculative” category several notches below investment grade. According to Standard & Poors, another rating agency, the Term B loan will provide a yield to maturity between 5.9% and 6.00%. The minimal call premiums would enable an issuer to buy back its debt, and re-issue at a lower rate if its rating improves. Earlier this year, another U.S. flag OSV player, Hornbeck Offshore called back $250 million of  8% senior notes (debt) issued in 2009 (and due in 2017) and entered into an even larger eight year bond (maturing in 2021) with a 5% coupon. The finance savings are compelling, outweighing a hefty premium on an early call. Hornbeck’s rating, now BB- (S &P) /Ba3 (Moody’s) is consistent with that from four years ago, but the overall interest rate curve had dropped tremendously.
Looking forward at the bigger picture, Harvey Gulf is in the midst of a hefty program of capital expenditures. Shane Guidry identified key points buttressing the game-changing nature of its investments. He emphasized that Harvey Gulf seeks to maintain and grow relationships with operators by constructing state of the art vessels designed to stay ahead of future safety and environmental regulations while also meeting the current and future needs of its customers.
Because Harvey Gulf’s equity has been supported by the PE investment from Jordan Company, the company’s further financial future beyond the $1 billion debt program is a subject of conjecture. The near-term outlook is robust. Moody’s said, in its rating action, “Currently, strong industry fundamentals in its primary geographic market are likely to keep demand high for Harvey’s OSV services, and potentially allow for some margin expansion through day-rate increases as the contracts on vessels from GOL are negotiated.”
The rating agency also throws down the gauntlet for strategic initiatives that could catapult Harvey Gulf into the tier of world class companies, a leap not attainable with another financial burst down the road. Moody’s, speaking about the credit rating, says: “At this time, an upgrade is unlikely mainly because of the company’s limited scale and revenue concentration. However, an increase in geographic diversification and asset base, a larger worldwide market share, and debt/ EBITDA – a financial measure of leverage compared to cash flow – sustained below 3.5x could result in an upgrade.” Moody’s says that the debt facility would likely contain a covenant limiting this ratio to 5.75x through June, 2015 – the timeframe when capital is needed to fund the new capacity. The rating report had noted a reliance on three un-named top customers (comprising over 60% of revenues) with a concentration of work in the Gulf of Mexico, as well as an exposure to the very cyclical E&P business.

Bottom Line
The world class future that Moody’s hints at would require a financial turbocharger at a time that the PE investor would likely be ready for an “exit.” Financial investors in shipping and offshore businesses typically ease out in three ways: the sale to another financial investor (another investment fund), the sale to a strategic investor (often, a competitor), or a public offering. Moody’s points to the unlikelihood of a debt reduction in the next 12 – 18 months (due to the capex associated with the newbuilds).
The ratings report does offer an important clue, saying that Harvey Gulf “…expects to acquire two additional OSVs (beyond the 9 vessels taken in Q2 2013) from GOL at a later date…” for a price working back to aggregate $79 million. It is not impossible to conjecture a partial PE “exit” or “liquidity” event, the first of several tranches, also bringing in sufficient money to purchase these assets (if the revolver is not used for this purpose). In this purely hypothetical scenario, as EBITDA grows dramatically and debt is paid down, the stars may align for a further PE exit at the time that total debt has crested and new assets are delivered. At that time, maybe 18 – 24 months out, an expanded valuation will be possible based on another important metric – the EV/EBITDA ratio, where peer companies are presently valued at around 9x - 10x.
Eventually, we got down to brass tacks and asked: When will Shane Guidry, if ever, ring the bell at NASDAQ? Without hesitation, he replied, “I don’t know. There’s no doubt we talk about it. I think I have a bigger, better story to tell – new assets, the most technology out there, very diverse – my average daily rate is $30,000 per day and we’ve got great growth. Do I want to stand pat and run 50 to 70 boats or do I look to take Harvey worldwide? If I do, I can’t rule out going public because access to capital would be quicker.”
Somewhat nonplussed at Moody’s inference that Harvey Gulf wasn’t doing enough international work, he told MarPro, “I’m getting great day rates here right now on long term contracts. Why would I change that? I really don’t have to do anything, especially with my current contracts, through maybe 2018. We have about $1 billion in contract backlog with substantial options on the backend of that. Do I want to deal with a large board of directors? Maybe not. But, I could take it public and keep it a closely held entity, too. For me, it would be better. And we’ve looked at our options.”
There’s plenty on Shane Guidry’s plate already without having to contemplate a public offering and then, answering to a large board of directors. Still, as he rides an enviable wave of good fortune in a bull market, industry analysts can’t help but wonder what will come next. And, he isn’t saying. 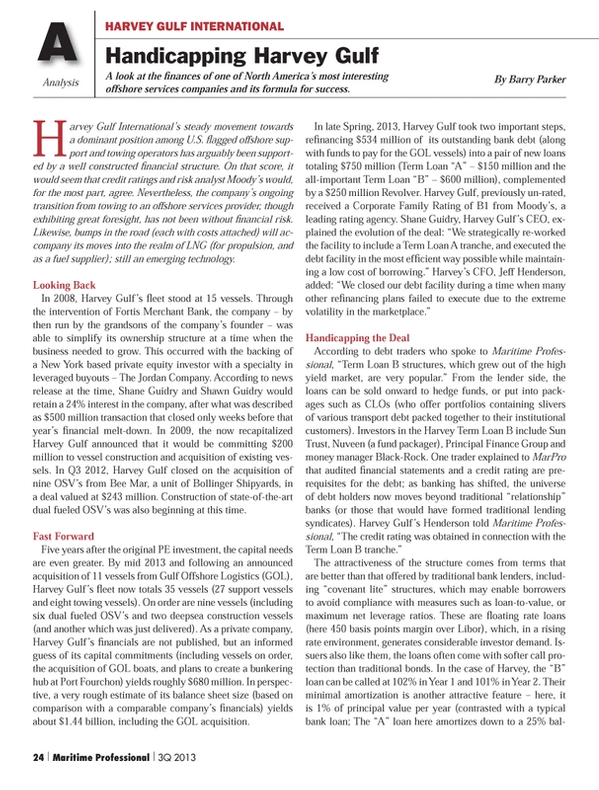