Remotely Operated Vehicles: Thinking out of the Box

All electric systems are starting to free companies from the traditional strict form factors that ROVs traditionally take. With a more flexible modular harness, vehicles can be built from standardised building blocks. Saab Seaeye, a firm well versed in all-electric vehicles, has been making noises in this direction, using the smarts it’s been developing for the Sabertooth for new electric vehicles.

Another firm looking to enter the resident vehicle space is UK-based subsea machinery firm SMD. During Offshore Europe, it launched its Quantum EV ROV. While the Quantum EV ROV made the headlines, what SMD launched was a technology suite, rather than a single ROV, based on an open-electric framework for whatever shape vehicle is required and that can be adapted for a variety of tethered or untethered operations.
Mark Collins, SMD’s Director for Remote and Autonomous Technologies, says four years’ work has gone into the design, which will be available as a product this year [2020] – but will also to be used as a harness for other form factor systems, such as AUVs because of its modularity.
Key was going all-electric, using an in-house designed 25kW DC electric propulsion system, to make it more environmentally friendly but also more energy efficient, compared with hydraulically powered systems, says Collins. This includes a new thruster, based on an enclosed magnetic gear box with only two moving parts, and a new HV DC transmission system. That means smaller diameter umbilicals can be used and down to 6,000 m, providing power to a 680v ring main DC system, that allows plug and play systems.

It’s been designed to operate tethered or untethered with a battery as a resident system or deployed from manned or unmanned vessels. And, the design aims to allow easy build-in of future technologies, such as developments in artificial intelligence.

Collins says the EV will have 20% more thrust and 50% fewer moving parts, compared to hydraulic systems. It’s also 20% more compact and 20% lighter, so it can be operated from smaller vessels. A hydraulic power unit has been developed for using hydraulic tools – until all-electric tooling is developed - using the new DC thruster motors and new hydraulic control units. When electric tools do come, they will be able to be stored on the vehicle in the space freed up by removing hydraulics, instead of having to add skids.

“The technology is a family of industrialised building blocks for subsea machines,” says Collins. “These are scalable and can be brought together to form different machines.  We created a Work Class ROV using the technology for the initial launch, but that is because it is familiar.  We could have easily created a underwater intervention drone or another type of vehicle. Starting at the foundation level and working up means we can ensure every component and sub-system is the best it can be. Clients can then customise from a solid base and layer on their own control methods should they wish to create differentiation.” 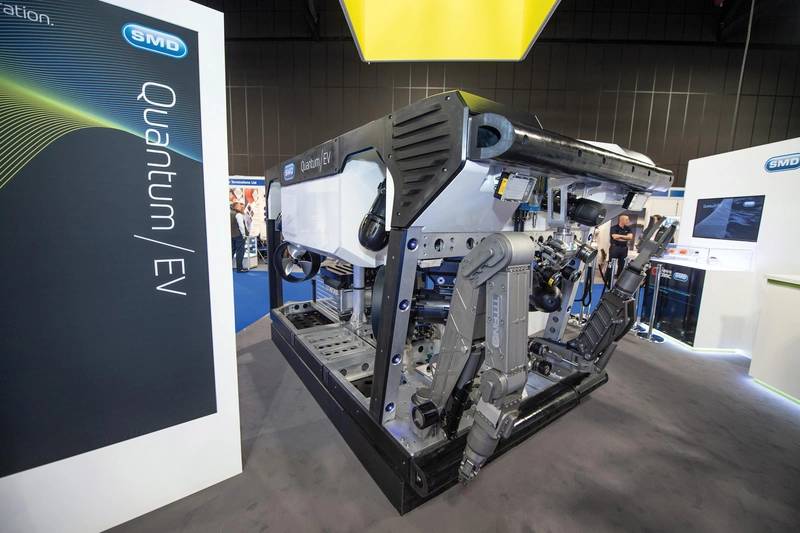