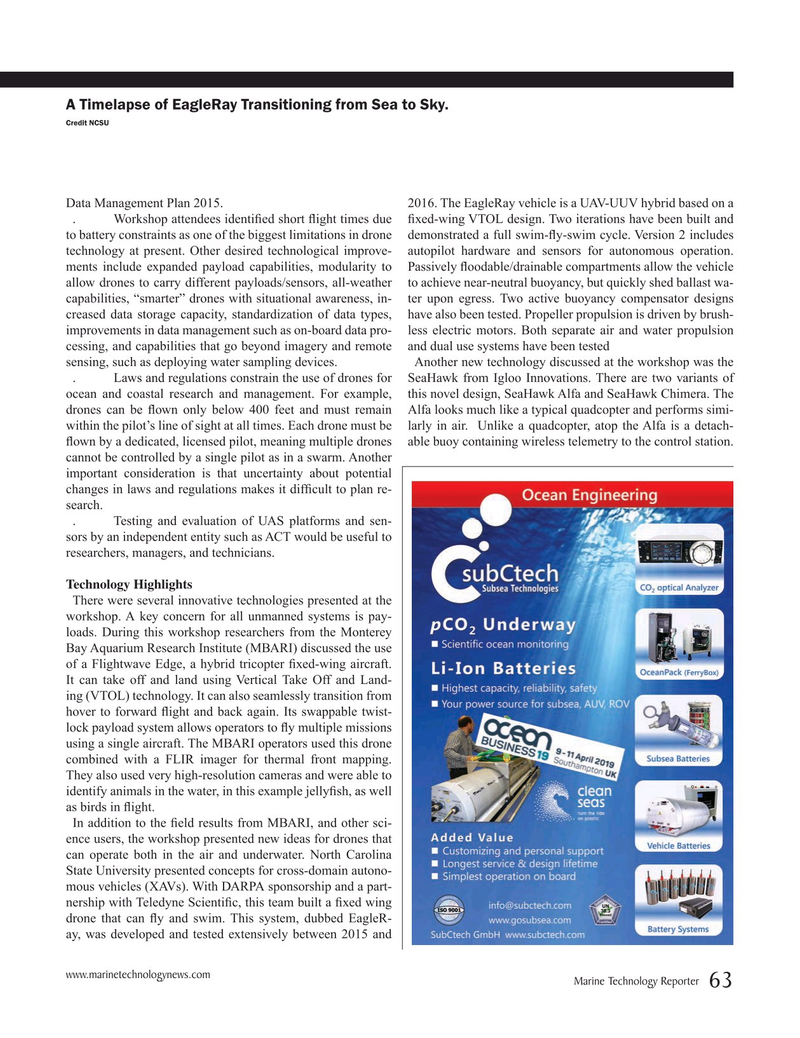 A Timelapse of EagleRay Transitioning from Sea to Sky.

Data Management Plan 2015. 2016. The EagleRay vehicle is a UAV-UUV hybrid based on a . Workshop attendees identi? ed short ? ight times due ? xed-wing VTOL design. Two iterations have been built and to battery constraints as one of the biggest limitations in drone demonstrated a full swim-? y-swim cycle. Version 2 includes technology at present. Other desired technological improve- autopilot hardware and sensors for autonomous operation. ments include expanded payload capabilities, modularity to Passively ? oodable/drainable compartments allow the vehicle allow drones to carry different payloads/sensors, all-weather to achieve near-neutral buoyancy, but quickly shed ballast wa- capabilities, “smarter” drones with situational awareness, in- ter upon egress. Two active buoyancy compensator designs creased data storage capacity, standardization of data types, have also been tested. Propeller propulsion is driven by brush- improvements in data management such as on-board data pro- less electric motors. Both separate air and water propulsion cessing, and capabilities that go beyond imagery and remote and dual use systems have been tested sensing, such as deploying water sampling devices. Another new technology discussed at the workshop was the . Laws and regulations constrain the use of drones for SeaHawk from Igloo Innovations. There are two variants of ocean and coastal research and management. For example, this novel design, SeaHawk Alfa and SeaHawk Chimera. The drones can be ? own only below 400 feet and must remain Alfa looks much like a typical quadcopter and performs simi- within the pilot’s line of sight at all times. Each drone must be larly in air. Unlike a quadcopter, atop the Alfa is a detach- ? own by a dedicated, licensed pilot, meaning multiple drones able buoy containing wireless telemetry to the control station. cannot be controlled by a single pilot as in a swarm. Another important consideration is that uncertainty about potential changes in laws and regulations makes it dif? cult to plan re- search. . Testing and evaluation of UAS platforms and sen- sors by an independent entity such as ACT would be useful to researchers, managers, and technicians.

There were several innovative technologies presented at the workshop. A key concern for all unmanned systems is pay- loads. During this workshop researchers from the Monterey

It can take off and land using Vertical Take Off and Land- ing (VTOL) technology. It can also seamlessly transition from hover to forward ? ight and back again. Its swappable twist- lock payload system allows operators to ? y multiple missions using a single aircraft. The MBARI operators used this drone combined with a FLIR imager for thermal front mapping.

They also used very high-resolution cameras and were able to identify animals in the water, in this example jelly? sh, as well as birds in ? ight.

In addition to the ? eld results from MBARI, and other sci- ence users, the workshop presented new ideas for drones that can operate both in the air and underwater. North Carolina

State University presented concepts for cross-domain autono- mous vehicles (XAVs). With DARPA sponsorship and a part- nership with Teledyne Scienti? c, this team built a ? xed wing drone that can ? y and swim. This system, dubbed EagleR- ay, was developed and tested extensively between 2015 and www.marinetechnologynews.com