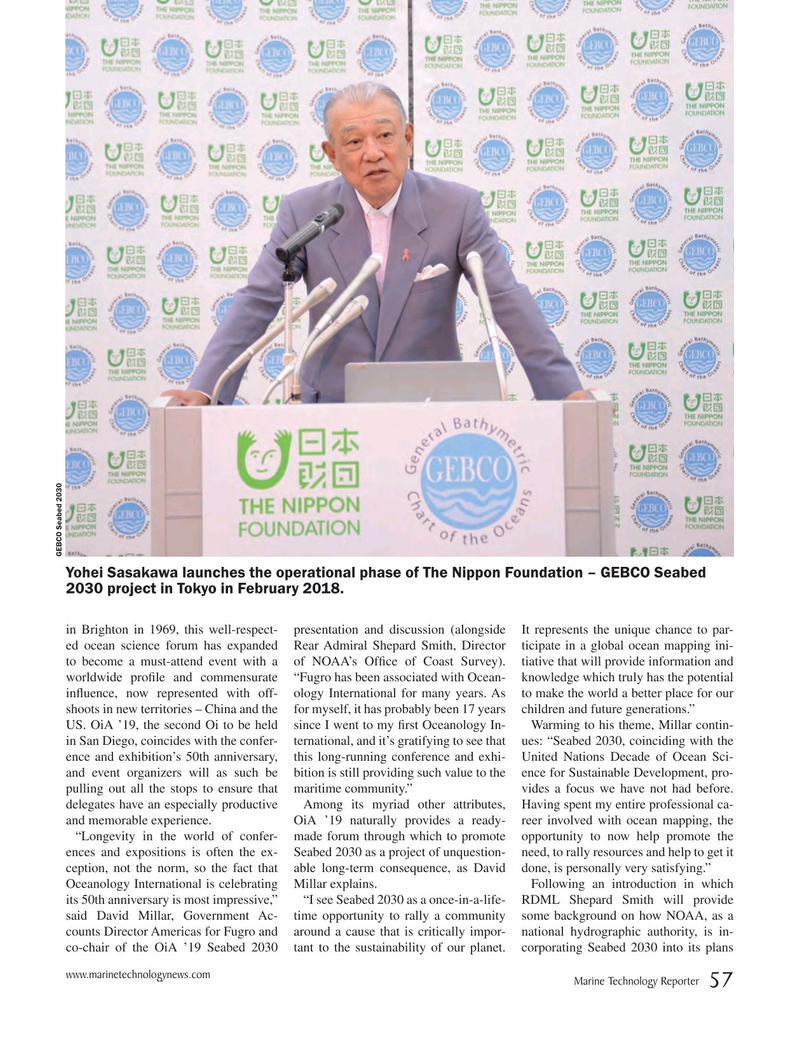 in Brighton in 1969, this well-respect- presentation and discussion (alongside It represents the unique chance to par- ed ocean science forum has expanded Rear Admiral Shepard Smith, Director ticipate in a global ocean mapping ini- to become a must-attend event with a of NOAA’s Of? ce of Coast Survey). tiative that will provide information and worldwide pro? le and commensurate “Fugro has been associated with Ocean- knowledge which truly has the potential in? uence, now represented with off- ology International for many years. As to make the world a better place for our shoots in new territories – China and the for myself, it has probably been 17 years children and future generations.”

US. OiA ’19, the second Oi to be held since I went to my ? rst Oceanology In- Warming to his theme, Millar contin- in San Diego, coincides with the confer- ternational, and it’s gratifying to see that ues: “Seabed 2030, coinciding with the ence and exhibition’s 50th anniversary, this long-running conference and exhi- United Nations Decade of Ocean Sci- and event organizers will as such be bition is still providing such value to the ence for Sustainable Development, pro- pulling out all the stops to ensure that maritime community.” vides a focus we have not had before. delegates have an especially productive Among its myriad other attributes, Having spent my entire professional ca- and memorable experience. OiA ’19 naturally provides a ready- reer involved with ocean mapping, the “Longevity in the world of confer- made forum through which to promote opportunity to now help promote the ences and expositions is often the ex- Seabed 2030 as a project of unquestion- need, to rally resources and help to get it ception, not the norm, so the fact that able long-term consequence, as David done, is personally very satisfying.”

Oceanology International is celebrating Millar explains. Following an introduction in which its 50th anniversary is most impressive,” “I see Seabed 2030 as a once-in-a-life- RDML Shepard Smith will provide said David Millar, Government Ac- time opportunity to rally a community some background on how NOAA, as a counts Director Americas for Fugro and around a cause that is critically impor- national hydrographic authority, is in- co-chair of the OiA ’19 Seabed 2030 tant to the sustainability of our planet. corporating Seabed 2030 into its plans www.marinetechnologynews.com