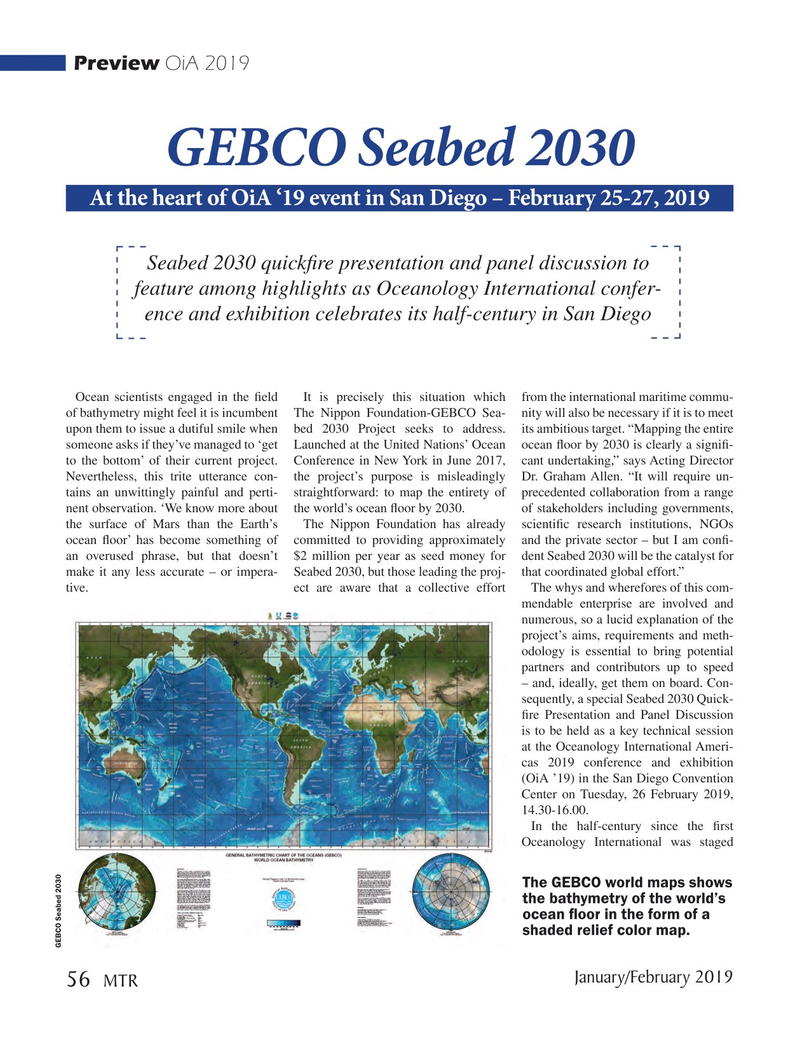 Seabed 2030 quick? re presentation and panel discussion to feature among highlights as Oceanology International confer- ence and exhibition celebrates its half-century in San Diego

Ocean scientists engaged in the ? eld It is precisely this situation which from the international maritime commu- of bathymetry might feel it is incumbent The Nippon Foundation-GEBCO Sea- nity will also be necessary if it is to meet upon them to issue a dutiful smile when bed 2030 Project seeks to address. its ambitious target. “Mapping the entire someone asks if they’ve managed to ‘get Launched at the United Nations’ Ocean ocean ? oor by 2030 is clearly a signi? - to the bottom’ of their current project. Conference in New York in June 2017, cant undertaking,” says Acting Director

Nevertheless, this trite utterance con- the project’s purpose is misleadingly Dr. Graham Allen. “It will require un- tains an unwittingly painful and perti- straightforward: to map the entirety of precedented collaboration from a range nent observation. ‘We know more about the world’s ocean ? oor by 2030. of stakeholders including governments, the surface of Mars than the Earth’s The Nippon Foundation has already scienti? c research institutions, NGOs ocean ? oor’ has become something of committed to providing approximately and the private sector – but I am con? - an overused phrase, but that doesn’t $2 million per year as seed money for dent Seabed 2030 will be the catalyst for make it any less accurate – or impera- Seabed 2030, but those leading the proj- that coordinated global effort.” tive. ect are aware that a collective effort The whys and wherefores of this com- mendable enterprise are involved and numerous, so a lucid explanation of the project’s aims, requirements and meth- odology is essential to bring potential partners and contributors up to speed – and, ideally, get them on board. Con- sequently, a special Seabed 2030 Quick- ? re Presentation and Panel Discussion is to be held as a key technical session at the Oceanology International Ameri- cas 2019 conference and exhibition (OiA ’19) in the San Diego Convention

In the half-century since the ? rst

The GEBCO world maps shows the bathymetry of the world’s ocean ? oor in the form of a shaded relief color map.