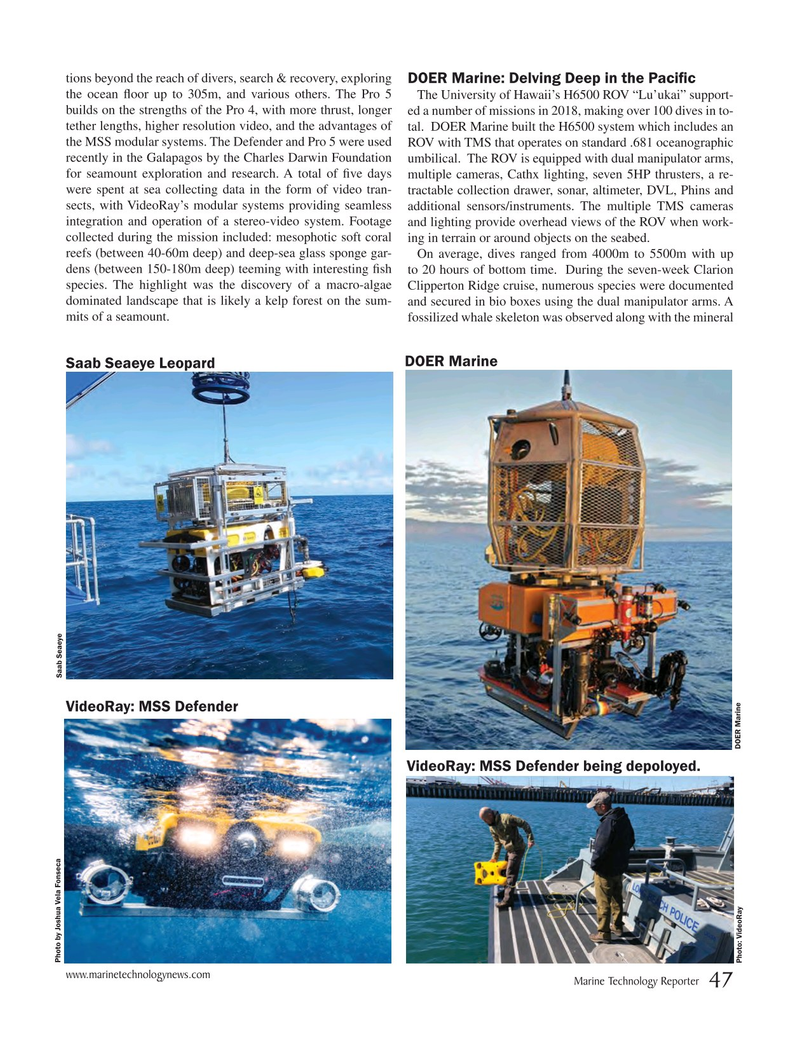 tions beyond the reach of divers, search & recovery, exploring

DOER Marine: Delving Deep in the Paci? c the ocean ? oor up to 305m, and various others. The Pro 5 The University of Hawaii’s H6500 ROV “Lu’ukai” support- builds on the strengths of the Pro 4, with more thrust, longer ed a number of missions in 2018, making over 100 dives in to- tether lengths, higher resolution video, and the advantages of tal. DOER Marine built the H6500 system which includes an the MSS modular systems. The Defender and Pro 5 were used ROV with TMS that operates on standard .681 oceanographic recently in the Galapagos by the Charles Darwin Foundation umbilical. The ROV is equipped with dual manipulator arms, for seamount exploration and research. A total of ? ve days multiple cameras, Cathx lighting, seven 5HP thrusters, a re- were spent at sea collecting data in the form of video tran- tractable collection drawer, sonar, altimeter, DVL, Phins and sects, with VideoRay’s modular systems providing seamless additional sensors/instruments. The multiple TMS cameras integration and operation of a stereo-video system. Footage and lighting provide overhead views of the ROV when work- collected during the mission included: mesophotic soft coral ing in terrain or around objects on the seabed. reefs (between 40-60m deep) and deep-sea glass sponge gar- On average, dives ranged from 4000m to 5500m with up dens (between 150-180m deep) teeming with interesting ? sh to 20 hours of bottom time. During the seven-week Clarion species. The highlight was the discovery of a macro-algae Clipperton Ridge cruise, numerous species were documented dominated landscape that is likely a kelp forest on the sum- and secured in bio boxes using the dual manipulator arms. A mits of a seamount. fossilized whale skeleton was observed along with the mineral