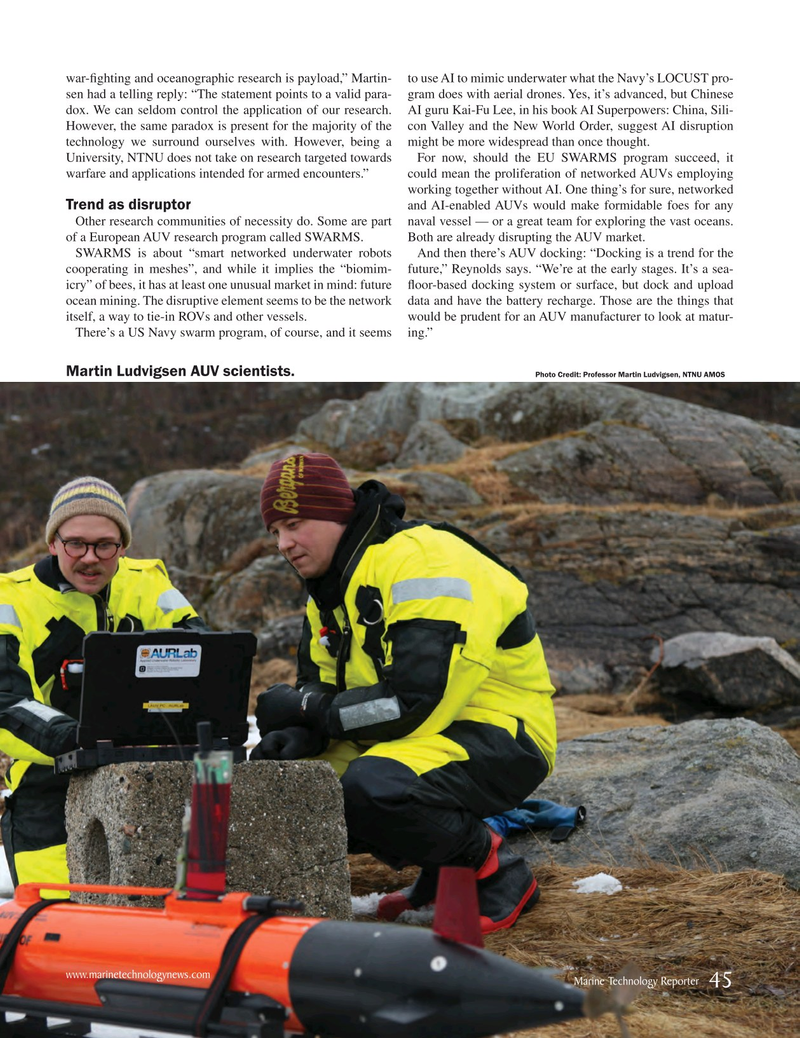 war-? ghting and oceanographic research is payload,” Martin- to use AI to mimic underwater what the Navy’s LOCUST pro- sen had a telling reply: “The statement points to a valid para- gram does with aerial drones. Yes, it’s advanced, but Chinese dox. We can seldom control the application of our research. AI guru Kai-Fu Lee, in his book AI Superpowers: China, Sili-

However, the same paradox is present for the majority of the con Valley and the New World Order, suggest AI disruption technology we surround ourselves with. However, being a might be more widespread than once thought.

University, NTNU does not take on research targeted towards For now, should the EU SWARMS program succeed, it warfare and applications intended for armed encounters.” could mean the proliferation of networked AUVs employing working together without AI. One thing’s for sure, networked

Other research communities of necessity do. Some are part naval vessel — or a great team for exploring the vast oceans. of a European AUV research program called SWARMS. Both are already disrupting the AUV market.

SWARMS is about “smart networked underwater robots And then there’s AUV docking: “Docking is a trend for the cooperating in meshes”, and while it implies the “biomim- future,” Reynolds says. “We’re at the early stages. It’s a sea- icry” of bees, it has at least one unusual market in mind: future ? oor-based docking system or surface, but dock and upload ocean mining. The disruptive element seems to be the network data and have the battery recharge. Those are the things that itself, a way to tie-in ROVs and other vessels. would be prudent for an AUV manufacturer to look at matur-

There’s a US Navy swarm program, of course, and it seems ing.”