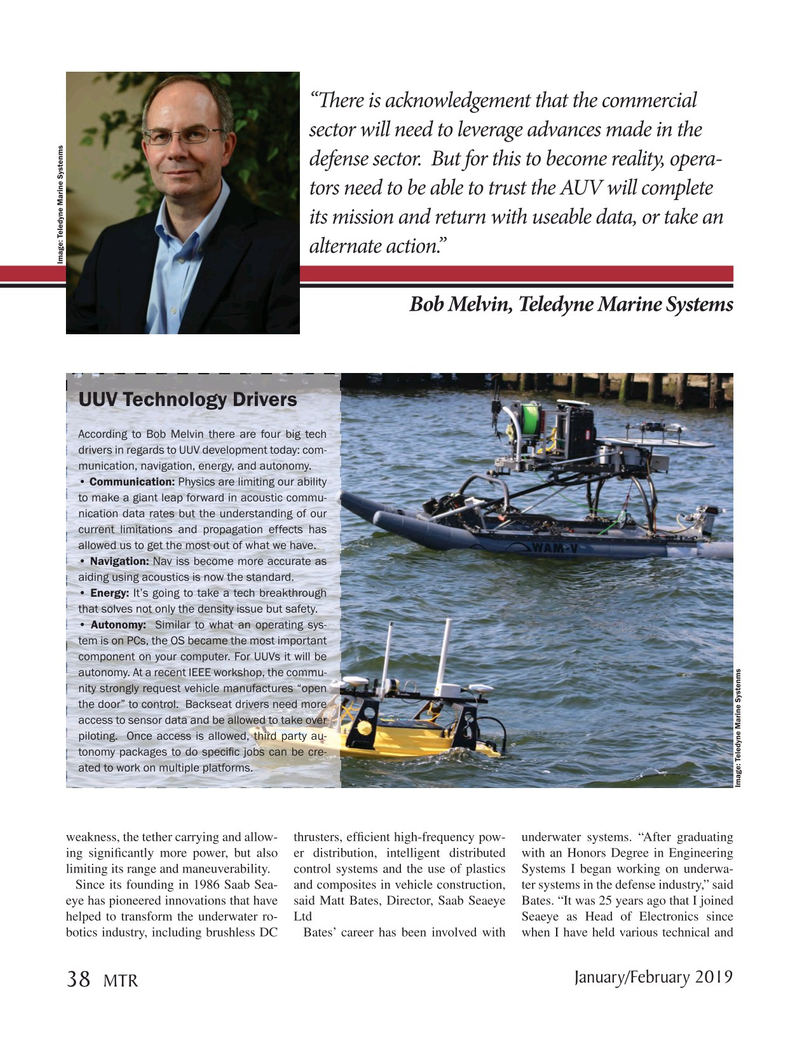 “T ere is acknowledgement that the commercial sector will need to leverage advances made in the defense sector. But for this to become reality, opera- tors need to be able to trust the AUV will complete its mission and return with useable data, or take an alternate action.”

According to Bob Melvin there are four big tech drivers in regards to UUV development today: com- munication, navigation, energy, and autonomy.

• Communication: Physics are limiting our ability to make a giant leap forward in acoustic commu- nication data rates but the understanding of our current limitations and propagation effects has allowed us to get the most out of what we have.

• Navigation: Nav iss become more accurate as aiding using acoustics is now the standard. • Energy: It’s going to take a tech breakthrough that solves not only the density issue but safety. • Autonomy: Similar to what an operating sys- tem is on PCs, the OS became the most important component on your computer. For UUVs it will be autonomy. At a recent IEEE workshop, the commu- nity strongly request vehicle manufactures “open the door” to control. Backseat drivers need more access to sensor data and be allowed to take over piloting. Once access is allowed, third party au- tonomy packages to do speci? c jobs can be cre- ated to work on multiple platforms.

Since its founding in 1986 Saab Sea- and composites in vehicle construction, ter systems in the defense industry,” said eye has pioneered innovations that have said Matt Bates, Director, Saab Seaeye Bates. “It was 25 years ago that I joined helped to transform the underwater ro- Ltd Seaeye as Head of Electronics since botics industry, including brushless DC Bates’ career has been involved with when I have held various technical and