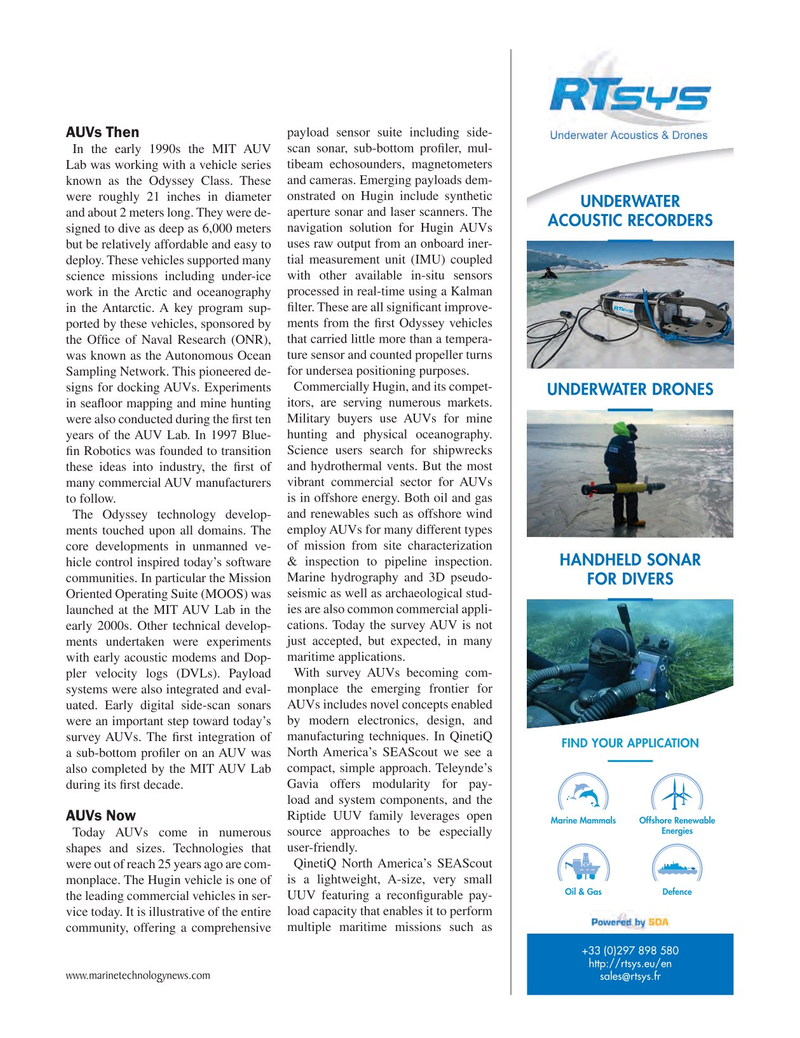 payload sensor suite including side-

Lab was working with a vehicle series tibeam echosounders, magnetometers known as the Odyssey Class. These and cameras. Emerging payloads dem- were roughly 21 inches in diameter onstrated on Hugin include synthetic

UNDERWATER UNDERWATER and about 2 meters long. They were de- aperture sonar and laser scanners. The

ACOUSTIC RECORDERSACOUSTIC RECORDERS signed to dive as deep as 6,000 meters navigation solution for Hugin AUVs but be relatively affordable and easy to uses raw output from an onboard iner- deploy. These vehicles supported many tial measurement unit (IMU) coupled science missions including under-ice with other available in-situ sensors work in the Arctic and oceanography processed in real-time using a Kalman in the Antarctic. A key program sup- ? lter. These are all signi? cant improve- ported by these vehicles, sponsored by ments from the ? rst Odyssey vehicles the Of? ce of Naval Research (ONR), that carried little more than a tempera- was known as the Autonomous Ocean ture sensor and counted propeller turns

signs for docking AUVs. Experiments Commercially Hugin, and its compet-

UNDERWATER DRONES in sea? oor mapping and mine hunting itors, are serving numerous markets. were also conducted during the ? rst ten Military buyers use AUVs for mine years of the AUV Lab. In 1997 Blue- hunting and physical oceanography. ? n Robotics was founded to transition Science users search for shipwrecks these ideas into industry, the ? rst of and hydrothermal vents. But the most many commercial AUV manufacturers vibrant commercial sector for AUVs to follow. is in offshore energy. Both oil and gas

The Odyssey technology develop- and renewables such as offshore wind ments touched upon all domains. The employ AUVs for many different types core developments in unmanned ve- of mission from site characterization

Oriented Operating Suite (MOOS) was seismic as well as archaeological stud- launched at the MIT AUV Lab in the ies are also common commercial appli- early 2000s. Other technical develop- cations. Today the survey AUV is not ments undertaken were experiments just accepted, but expected, in many with early acoustic modems and Dop- maritime applications.

FIND YOUR APPLICATION a sub-bottom pro? ler on an AUV was North America’s SEAScout we see a also completed by the MIT AUV Lab compact, simple approach. Teleynde’s during its ? rst decade. Gavia offers modularity for pay- load and system components, and the

Today AUVs come in numerous source approaches to be especially shapes and sizes. Technologies that user-friendly. were out of reach 25 years ago are com- QinetiQ North America’s SEAScout monplace. The Hugin vehicle is one of is a lightweight, A-size, very small

Oil & Gas Defence the leading commercial vehicles in ser- UUV featuring a recon? gurable pay- vice today. It is illustrative of the entire load capacity that enables it to perform community, offering a comprehensive multiple maritime missions such as +33 (0)297 898 580 http://rtsys.eu/en www.marinetechnologynews.com sales@rtsys.fr