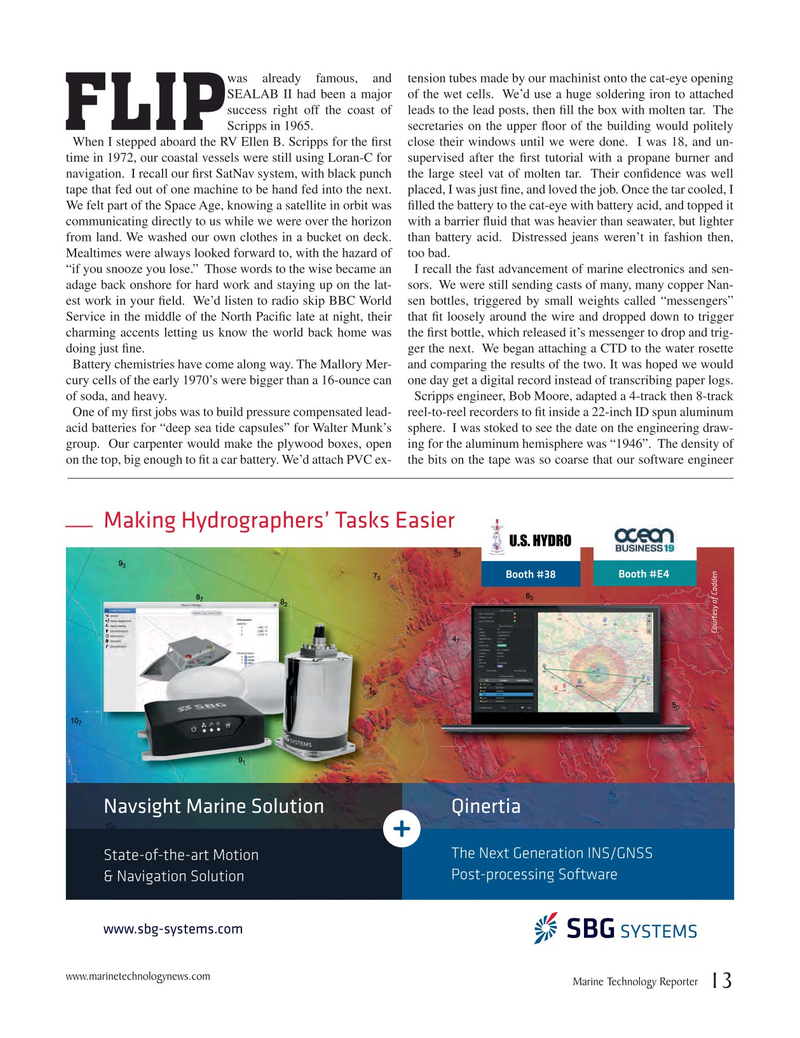 was already famous, and tension tubes made by our machinist onto the cat-eye opening

SEALAB II had been a major of the wet cells. We’d use a huge soldering iron to attached success right off the coast of leads to the lead posts, then ? ll the box with molten tar. The

FLIP Scripps in 1965. secretaries on the upper ? oor of the building would politely

When I stepped aboard the RV Ellen B. Scripps for the ? rst close their windows until we were done. I was 18, and un- time in 1972, our coastal vessels were still using Loran-C for supervised after the ? rst tutorial with a propane burner and navigation. I recall our ? rst SatNav system, with black punch the large steel vat of molten tar. Their con? dence was well tape that fed out of one machine to be hand fed into the next. placed, I was just ? ne, and loved the job. Once the tar cooled, I

We felt part of the Space Age, knowing a satellite in orbit was ? lled the battery to the cat-eye with battery acid, and topped it communicating directly to us while we were over the horizon with a barrier ? uid that was heavier than seawater, but lighter from land. We washed our own clothes in a bucket on deck. than battery acid. Distressed jeans weren’t in fashion then,

Mealtimes were always looked forward to, with the hazard of too bad. “if you snooze you lose.” Those words to the wise became an I recall the fast advancement of marine electronics and sen- adage back onshore for hard work and staying up on the lat- sors. We were still sending casts of many, many copper Nan- est work in your ? eld. We’d listen to radio skip BBC World sen bottles, triggered by small weights called “messengers”

Service in the middle of the North Paci? c late at night, their that ? t loosely around the wire and dropped down to trigger charming accents letting us know the world back home was the ? rst bottle, which released it’s messenger to drop and trig- doing just ? ne. ger the next. We began attaching a CTD to the water rosette

Battery chemistries have come along way. The Mallory Mer- and comparing the results of the two. It was hoped we would cury cells of the early 1970’s were bigger than a 16-ounce can one day get a digital record instead of transcribing paper logs.

of soda, and heavy. Scripps engineer, Bob Moore, adapted a 4-track then 8-track

One of my ? rst jobs was to build pressure compensated lead- reel-to-reel recorders to ? t inside a 22-inch ID spun aluminum acid batteries for “deep sea tide capsules” for Walter Munk’s sphere. I was stoked to see the date on the engineering draw- group. Our carpenter would make the plywood boxes, open ing for the aluminum hemisphere was “1946”. The density of on the top, big enough to ? t a car battery. We’d attach PVC ex- the bits on the tape was so coarse that our software engineer