The UFRJ Nautilus AUV is an academic project designed to develop autonomous underwater vehicle (AUV) technology in Brazil and participate in the annual Robosub competition. According to project founder, Lucas Armand, a Naval and Ocean Engineering graduate from the Federal University of Rio de Janeiro (UFRJ), the emergence of Nautilus has a lot to do with personal history: “I was having a difficult time in college, because I no longer identified myself with the course. The UFRJ Naval Engineering degree tends to be quite traditional – sometimes even old-fashioned – and I’ve always enjoyed technology,” Armand said. “Besides, I was watching the market around me collapse; I felt that when I was educated there would be no good job opportunities to justify my effort to learn what did not satisfy me. Except that I had already invested almost three years of my life in that course, I did not want to lose everything. So, I decided on my own motivation.”

“My idea was to bring something about technology to the reality of the course that I identified with. I decided that I would study autonomous vehicles and I tried to make intercessions with the course. Soon, I found the AUVs, a technology that had existed for some 20 years, with several applications in the area of oil and mining, but which is not very popular in Brazil. And I also found RoboSub, a North American university AUV competition. It made my eyes shine. From then on, I tried to apply the AUVs in all the subjects that I had to study in the university. For example, when we studied ship maneuverability, I talked to the teacher and asked if I could do a project on AUV maneuverability; It was not worth any credits, but he liked it and guided me. Doing these extra projects was what motivated me to study. After delivering this project, I talked to Professor Baraúna of Naval Engineering and he agreed to mentor the competition team. Soon, in early 2016, I sent an internal e-mail through the UFRJ network and some students proposed to participate,” Armand explained.

Financing and Sponsorships
With regards to financing, UFRJ Nautilus had several moments. In the first one, they took resources from their own pocket to build the AUV and participate in the competition. It was the first 6 months of the team. Then they incorporated new members and increased their workforce. They received support from companies through donated material and some institutional support from UFRJ and engineering laboratories, with rooms, tools, etc. Now they are going through a third moment, with increased conversations with companies, collaborative financing, firmer ties with UFRJ, and strengthened partnerships with other governmental institutions (like the Navy Research Institute-IPqM). The project has begun to gain more freedom to grow and has a strong base to believe their future is promising.

Currently, UFRJ Nautilus is composed of about 30 members, undergraduate and graduate students. Among the specialties, there are Naval and Oceanic Engineering, Mechanical Engineering, Electrical Engineering, Electronic and Computer Engineering, Control and Automation Engineering, Production Engineering, Meteorology, Mathematical and Earth Sciences, Architecture, Product Design, International Relations, Defense and Strategic Management, Maritime Studies and Public Management. Given the complexity of technology, multidisciplinary research and the high amount of resources demanded, the team structured itself into large areas for better organization. They are: Hydrodynamics and Mechanics; Electrical and Electronics; Software; Management of People and Resources; and Marketing – the first being the area with the highest investment.

The team has support divided into three branches: institutional, governmental and private. Institutionally, the university supports them with offices, to carry out the technical and administrative activities. In addition, they were able to sign several partnerships with important laboratories of belonging Coppe (UFRJ Technology Center), which provided them mechanical and electronic workshops, supported by technical professionals.

“Outside the university, we have secured the support of another government organization, which has been extremely productive and beneficial,” Armand said. “Since 2016, the Navy Research Institute (IPqM) has supported us in the development of our software. Our work with the Acoustic Systems Group has developed the algorithms for the acoustic signal processing, implementing the beam forming algorithm for our AUV to find pings in the competition. This experience provided an unparalleled learning experience, because the institution is a reference in the sonar field. IPqM also provided us with its mechanics and electronics workshops for the development of Nautilus. Because of this enriching experience, the Director of the Institute made it clear that IPqM wants to increasingly strengthen the partnership and expand it to other lines of research within the institute.”

UFRJ Nautilus also has several partnerships with the private sector. “In fact, the private sector companies are our main supporters, especially through the donation of parts, services, equipment and also financial donations. Organizations such as Wärtsilä, IBM, National Instruments, SolidWorks, MathWorks, OpenROV, Cortex, Forseti, Ciplast, DKR Engineering and Consulting, among others, believe in our design and capabilities. Currently, Wärtsilä Brazil has contributed most to the team,” Armand said.

Robosub Competition 2018
“The main challenge was to structure the team, increase institutional support, recruit new sponsors, develop and research technical areas used in AUVs and start a new project from scratch, while being competitive. With so much work to be done, the team was structured so that it could act in both research and development (R & D) challenges. Major difficulties were that the knowledge about the subject was still embryonic in Brazil, and the instruments used in an AUV are very difficult to find in Brazil, many being nonexistent and needing to be imported. This factor, coupled with the fact that Brazil imposes logistic difficulties when importing materials, made it difficult to maintain our project schedule. However, this was somewhat good for the of us as engineering students, in dealing with difficulties and delays and thinking of solutions so that the problems did not interfere with the progress of the project,” Armand said.

UFRJ Nautilus already participated in RoboSub in 2016, the year in which the team was founded. Due to lack of funds, they were unable to participate in the 2017 edition, but worked hard to return in 2018. RoboSub has existed for more than 20 years and is the main international academic competition for AUVs, Since 1997. The competition takes place annually in San Diego. It attracts a global participation, also attracting large companies such as Northrop Grumman, Raytheon, Siemens, General Atomics, MathWork, Teledyne, SolidWorks, BlueRobotics, among others, as well as the U.S. Navy. In this way, competition becomes a networking space between young engineers and specialists. “If we want to develop our skills as a team and as innovative national agents, we consider our participation in RoboSub to be essential,” Armand said. “Being a Brazilian team and the first Latin American team in the competition is a great responsibility, but it also gives us great pride. Our result this edition was a great joy for all, we managed with our AUV to go to the semifinals of the competition, we could thus demonstrate our ability to develop cutting-edge technology as a university and as a nation.” 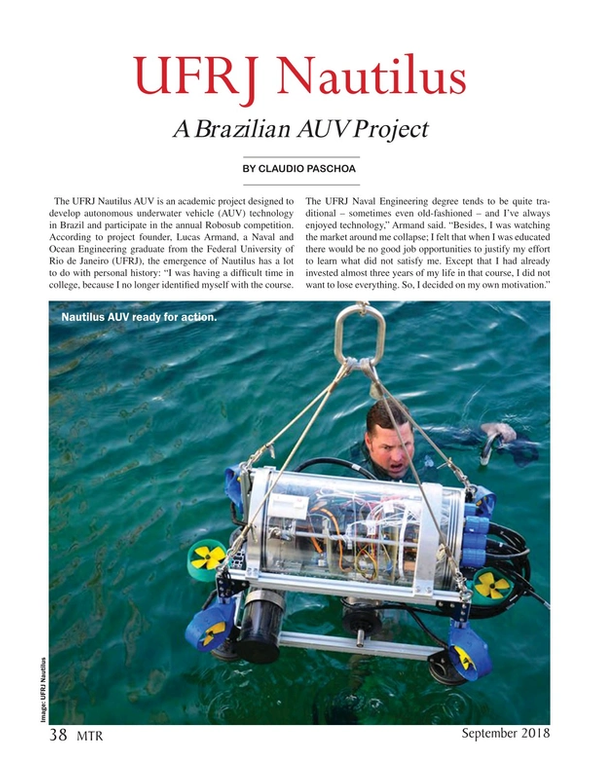