Read this page in Pdf, Flash or Html5 edition of May 2018 Marine Technology Magazine 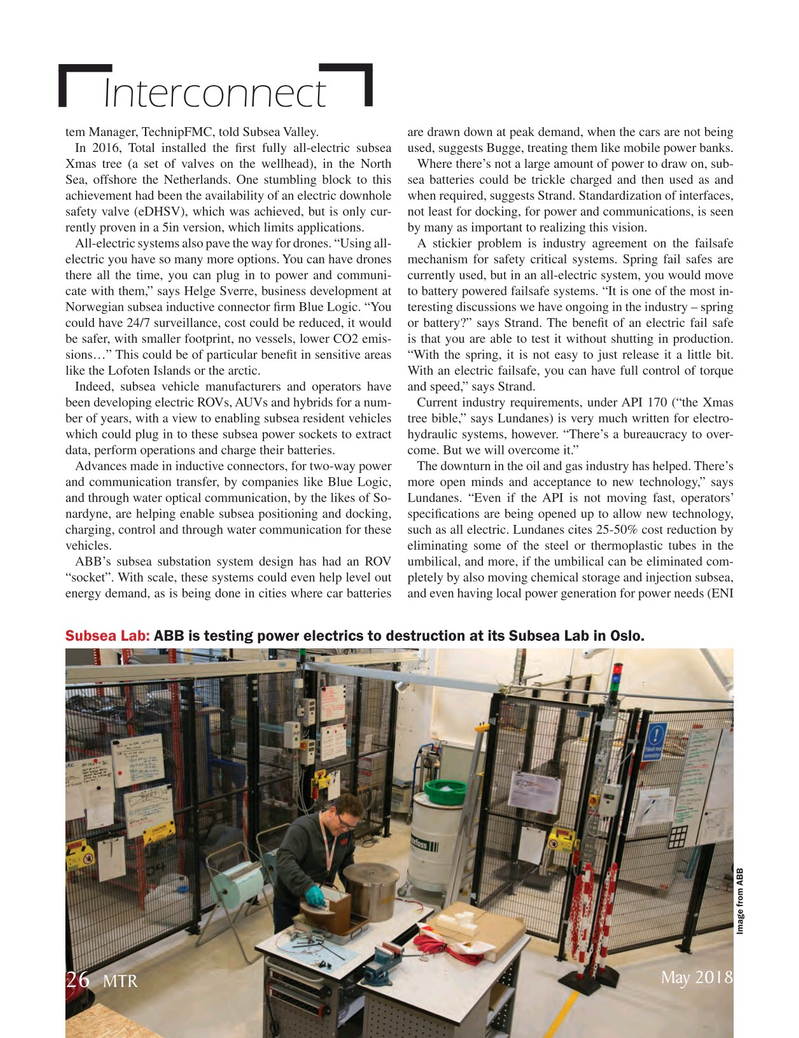 Interconnect tem Manager, TechnipFMC, told Subsea Valley. are drawn down at peak demand, when the cars are not being

Xmas tree (a set of valves on the wellhead), in the North Where there’s not a large amount of power to draw on, sub-

Sea, offshore the Netherlands. One stumbling block to this sea batteries could be trickle charged and then used as and achievement had been the availability of an electric downhole when required, suggests Strand. Standardization of interfaces, safety valve (eDHSV), which was achieved, but is only cur- not least for docking, for power and communications, is seen rently proven in a 5in version, which limits applications. by many as important to realizing this vision.

All-electric systems also pave the way for drones. “Using all- A stickier problem is industry agreement on the failsafe electric you have so many more options. You can have drones mechanism for safety critical systems. Spring fail safes are there all the time, you can plug in to power and communi- currently used, but in an all-electric system, you would move cate with them,” says Helge Sverre, business development at to battery powered failsafe systems. “It is one of the most in-

Norwegian subsea inductive connector ? rm Blue Logic. “You teresting discussions we have ongoing in the industry – spring could have 24/7 surveillance, cost could be reduced, it would or battery?” says Strand. The bene? t of an electric fail safe be safer, with smaller footprint, no vessels, lower CO2 emis- is that you are able to test it without shutting in production. sions…” This could be of particular bene? t in sensitive areas “With the spring, it is not easy to just release it a little bit. like the Lofoten Islands or the arctic. With an electric failsafe, you can have full control of torque

Indeed, subsea vehicle manufacturers and operators have and speed,” says Strand. been developing electric ROVs, AUVs and hybrids for a num- Current industry requirements, under API 170 (“the Xmas ber of years, with a view to enabling subsea resident vehicles tree bible,” says Lundanes) is very much written for electro- which could plug in to these subsea power sockets to extract hydraulic systems, however. “There’s a bureaucracy to over- data, perform operations and charge their batteries. come. But we will overcome it.”

Advances made in inductive connectors, for two-way power The downturn in the oil and gas industry has helped. There’s and communication transfer, by companies like Blue Logic, more open minds and acceptance to new technology,” says and through water optical communication, by the likes of So- Lundanes. “Even if the API is not moving fast, operators’ nardyne, are helping enable subsea positioning and docking, speci? cations are being opened up to allow new technology, charging, control and through water communication for these such as all electric. Lundanes cites 25-50% cost reduction by vehicles. eliminating some of the steel or thermoplastic tubes in the

ABB’s subsea substation system design has had an ROV umbilical, and more, if the umbilical can be eliminated com- “socket”. With scale, these systems could even help level out pletely by also moving chemical storage and injection subsea, energy demand, as is being done in cities where car batteries and even having local power generation for power needs (ENI

Subsea Lab: ABB is testing power electrics to destruction at its Subsea Lab in Oslo.