Operation of marine survey vessels in shallow-water coastal environments is a dangerous endeavor. A subsurface obstruction can tear a multi-beam sonar from its tow cable, resulting in loss of the expensive device and potential delay in the expedition. Lost equipment, however, is a minor inconvenience compared to the equally real possibility of the ship running aground in poorly charted waters, endangering the safety of its crew and incurring millions of dollars in damage.

For this reason, survey vessel operators invest considerable time and money to minimize the risk involved in each voyage. They are always on the lookout for new technologies to enhance the safety of their personnel and equipment while also improving the bottom lines of their projects. With this goal in mind, MG3 Survey UK Limited has turned to Earth observation satellites flying hundreds of miles overhead to get a better idea of what obstacles lay beneath the waves in the most perilous coastal zones.

One of MG3’s vessels recently returned from completing a survey in the Caribbean where the planning team relied on multiple bathymetry products, including satellite-derived data, to perform a ‘desktop mapping’ of the numerous jagged coral reefs in the area. This work was done long before the ship embarked on its voyage. In fact, MG3 employed the data even before it submitted a bid on the project.

Satellite Data
Based in Warminster, England, MG3 is a marine geoscience survey firm. MG3 maintains a fleet of three multi-role DP1 vessels capable of operations in the offshore and coastal areas, each outfitted with a variety of side- and multi-beam sonar as well as towed magnetometer devices for subsurface surveying.

The firm became acquainted with the uses of satellite imagery for marine applications about five years ago when it teamed on bathymetric survey bids with TCarta, a geospatial solutions company (then called Proteus Geo) based in Bristol, UK. At the time, TCarta was establishing itself as a provider of a new type of near-shore water depth map data called satellite derived bathymetry.

“As business partners, our companies worked collaboratively because we could provide an offering that combined the MG3 deep-water hydrographic survey data with our coastal satellite derived bathymetry product,” said Richard Flemmings, Operations Director for TCarta.

The TCarta product appealed to MG3 because the satellite imagery could provide accurate seafloor depth data in the shallow coastal areas where it’s often too risky to take survey vessels or tow costly equipment even a few meters below the surface.

“The satellite derived process is more cost-effective than airborne or shipborne methods of bathymetric data collection,” said Flemmings. “It costs about one-tenth that of other techniques.”

In addition to its financial attractiveness, satellite derived bathymetry became instantly popular for several reasons with businesses operating in the coastal zone. Safety is the primary one, as the technique requires putting no boats or personnel in the dynamic and dangerous near-shore environment. Just as importantly, damage to the environment is eliminated since the remote sensing process does not involve contact with the water or shore. “There are no airspace concerns with satellite imagery,” added Flemmings. “The DigitalGlobe satellites fly high above airspace restrictions with almost daily access to every spot on the Earth’s surface.”

Planning a Bid
In a typical marine survey project like the recent one in the Caribbean, MG3 first employs the bathymetric data during the tender phase. Steve Jackson and his team obtain satellite derived bathymetry and a complementary Marine Basemap product for the area of interest (AOI) from TCarta. The Basemap is a stylized bathymetric image created by TCarta for use as a marine GIS backdrop, primarily in offshore environments. It shows depth grids and contour lines at 90m resolution.

In the Caribbean, Jackson used the 90m data to get an overall snapshot of the deep offshore segments of the AOI. At this point, he was primarily interested in charting any obstructions in the deep water that might pose a hazard to the vessel and equipment. He also noted the most efficient routes into and out of the area.

Closer to the shore, project planning focused on the satellite derived bathymetry. Again, Jackson examined the data for the presence of reefs in the shallow Caribbean waters. He used this information to plan survey lines and to determine which towed equipment could be deployed in various parts of the AOI. The various towed sensors have water depth thresholds at which they are most efficient.

“This is for commercial purposes where we can complete the project as quickly as possible for the client,” said Jackson.

MG3 used the information – voyage time, survey lines and equipment usage – to put a price tag on its project bid. Each vessel costs tens of thousands of dollars per day to operate, with towed devices adding to the expense. This means determining the fastest route there and most efficient survey lines on site potentially shaved time off the project, which put the UK firm in a better position to win the job.

Safety First
An accurate tender bid, however, is not the only use for the satellite derived bathymetry. As Jackson examines data for efficiency, he is also keenly evaluating risk. The data sets have the fidelity and accuracy to reveal obstructions on the seafloor that must also be considered from a safety perspective when planning each segment of the survey work near the shore. Seafloor depth and submerged obstructions will dictate where the ship can go and where towed equipment can be deployed.

For every project conducted in a remote location, Jackson uses the data to plot the fastest egress routes from the AOI to the closest population center in case a crew member becomes ill or injured. With this information, the vessel commander always knows where the closest hospital is located and how to get there quickly and safely.

“We have to take into account the safety issues of grounding the vessel and being stranded…and it’s crucial we don’t hit the bottom with our equipment, and damage or lose it,” said Jackson. “All this information is calculated into a risk matrix where we plan the job to conduct it in the safest possible manner.”

Jackson acknowledged that some coastal areas are simply too treacherous to navigate one of its vessels. In such cases, they try to find an alternative way of capturing the survey data requested by the client, which may include putting a smaller boat in the water. But that option presents its own risks.

“During the tender stage, we can go back to the client and convey the risk of near-shore operations [in specific areas],” said Jackson.

“In some areas, we have suggested the client rely on the Satellite Derived Bathymetry instead of the ship.”

In the shallow coastal waters of the Caribbean, MG3 was able to navigate the entire near-shore area requested by the client without incident. No equipment was lost, and the MG3 vessel successfully avoided the submerged reefs identified in the satellite data. The project was completed on schedule and on budget.

Accessing the Satellite Data
According to Jackson, the accuracy of TCarta marine products has compelled his team to acquire them for numerous projects in recent years. And now MG3 has played a role in making these and products more readily accessible to a wider group of end users in the marine community.

In 2016, TCarta and DHI won a grant from the European Space Agency to help pay for development of an online portal to support direct sales of the off-the-shelf Satellite Derived Bathymetry data along with other geospatial marine products. The ESA grant required TCarta and DHI to include existing clients in the development of the portal, and MG3 gladly served that role, offering its insights into how the online data should be packaged, formatted and delivered.

Until then, the custom-produced bathymetry products were used mostly by government agencies, energy exploration companies, infrastructure engineering consultancies and other large organizations with interest in near-shore coastal areas. As TCarta generated products for customers operating in the Red Sea and Arabian Gulf, it began to build an impressive archive of highly accurate Satellite Derived Bathymetry that could be sold as off-the-shelf data sets.

“We set our sights on making our marine products available more affordably to smaller organizations by selling on-demand data sets in small tiles on a per-kilometer basis,” said Flemmings.

The Bathymetrics Data Portal went live in 2017 providing users the ability to search for data availability through a map or coordinate-entry interface, preview the bathymetric data onscreen and then pay for just the area-of-interest they need via an e-commerce module. The product streams directly into common GIS or mapping software package used by the customer.

(As published in the April 2018 edition of Marine Technology Reporter) 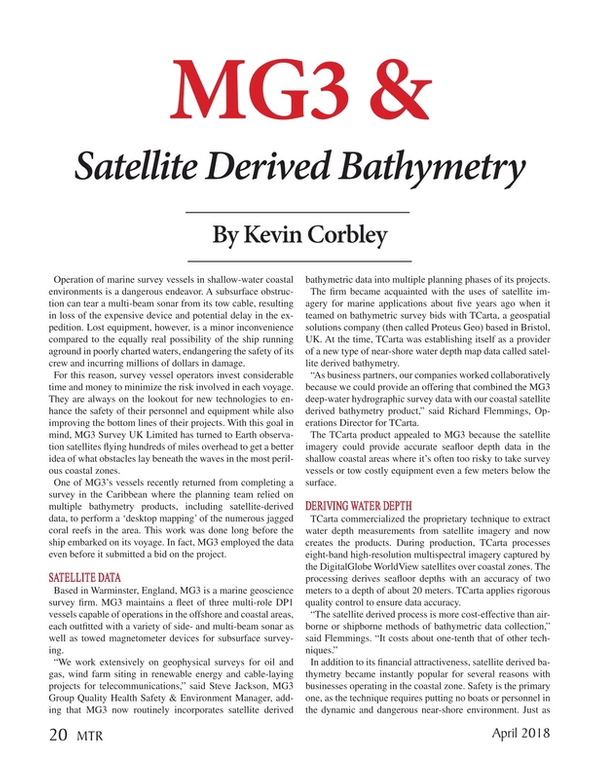