As technologies mature and dramatic cost-cutting continues, the future is looking bright for offshore wind. Below are five trends to keep an eye on.

Growth in this sector is expected to continue. WindEurope said in its 2017 “Scenarios for 2030” report that total installed capacity offshore could increase fivefold to 70 GW by 2030 according to the central scenario, or by as much as 99 GW in the high scenario. The majority of offshore wind installations will occur in the North Sea, with almost 48 GW installed by 2030 in the central scenario. In the Baltic Sea, where 1.5 GW of offshore wind is online today, projects in Poland, Estonia, Germany, Denmark and Sweden could add 9 GW installed by 2030. In the Atlantic Sea, where there is almost no capacity today, close to 8 GW could be reached thanks to installations in France, the U.K. and, on a smaller scale, Portugal. The U.K. will also install the majority of the capacity in the Irish Sea, which will total close to 6 GW. Italian and French installations could boost capacity in the Mediterranean Sea to 0.5 GW.

2. Bigger is Better
Across the globe, offshore wind projects are incorporating the latest innovations in wind turbine technology as manufacturers are building larger turbines on advanced foundation designs in even greater water depths. Larger turbines that are able to capture more energy and are more efficient allow fewer installations and lower maintenance costs and are therefore key in the industry drive to minimize costs and maximize efficiency.

This trend toward increased size and scale will continue.

In March 2018, GE Renewable Energy announced it will invest more than $400 million over the next three to five years to develop and deploy the Haliade-X 12 MW, a new world’s largest offshore wind turbine featuring a 12 MW capacity, 220-meter rotor, a 107-meter blade. Towering 260 meters over the sea, Haliade-X will produce 45 percent more energy than any other offshore wind turbine presently available and will generate up to 67 GWh annually, GE said.

3. Cost Cutting Continues
The offshore wind industry set a goal to decrease prices toward the target of €100/MWh by 2020. With the help of larger and more efficient turbines, auction prices in many instances have far exceeded the cost reduction targets with projects delivering bids significantly below that level. “All of a sudden offshore is competitive with onshore wind, and the repercussions have been felt across the world, setting the stage for a round of large investments in offshore not only in Europe, but also in Asia and North America,” the Global Wind Energy Council said in its Market Forecast for 2017-2021 report.

As cost reductions continue, new opportunities will arise and new ground will be broken. For example, in March this year, the Dutch Government awarded Vattenfall a tender to develop the twin 350 MW Hollandse Kust Zuid offshore wind farms, which when built by 2022 will be the world’s first to be built without public subsidy.

This follows another landmark zero-subsidy offshore wind tender in Germany last year which was the first to attract zero subsidy winning bids, but will be built later in 2024-2025.

In the U.S., a total potential capacity of more than 54GW of wind energy generation is currently being planned, with a total capital investment of over $1.5 trillion by 2030, according to the Business Network for Offshore Wind. Most coastal states have at least one planned offshore wind project in the pipeline, with several states having enacted new policy or bolstered their existing policy to support project development.

5. The Future is Floating
Once written off as infeasible, floating offshore wind farms are gaining momentum. The 30MW Hywind Scotland wind farm operated by Statoil in partnership with Masdar 25 kilometers offshore Peterhead, Scotland began production as the world’s first full-scale commercial floating wind farm in October 2017. And in its first months of production, Hywind Scotland has performed better than expected. During the winter, when the wind is at its strongest, the typical capacity factor for a bottom-fixed offshore wind farm is 45-60 percent. By comparison, Hywind Scotland achieved an average of approximately 65 percent during November, December and January, Statoil said.

Floating wind turbines hold potential for locations where the water is too deep for typical fixed-bottom turbines. This promise will become greater as technological advances and cost reductions continue, much as they have in the bottom-fixed segment. Statoil sees key markets for its Hywind technology in Europe, Japan and West Coast U.S., and predicts there could be nearly 13 GW floating wind capacity installed by 2030.


(As published in the April 2018 edition of Marine Technology Reporter) 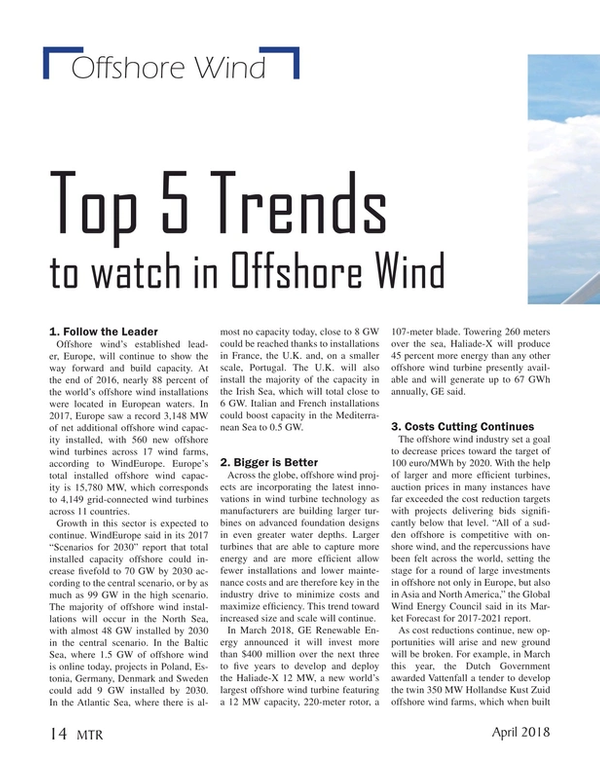