While substantial amounts of petroleum reserves exist in the Arctic—30% of the undiscovered gas and 13% of the undiscovered oil, according to the U.S. Geological Survey’s 2009 estimates — there are hurdles that need to be cleared before oil and gas companies can efficiently operate there.  A high priority is to be able to accurately predict the forces that nearby ice floes would exert on a vessel’s hull upon impact, and have the ability to react to this information in a timely manner (see sidebar, page 48). A Dynamic Positioning (DP) system outfitted to operate in managed  ice (following icebreaking) would satisfy this requirement. It needs to (1) be equipped with predictive capability, (2) be able to determine the counterforce that will be required to offset the force of ice collision, (3) “know” the limitations of the vessel’s engine power and propulsion system, (4) recognize when ice loads will exceed these limits and provide a signal to the DP Operator, and (5) when the force of impact of ice loads is within the vessel’s limits, automate the response from the thrusters and propulsion system required to maintain station. Such a DP system would be particularly valuable for a drillship when carrying out operations. When the system notifies the DP Operator that the vessel will be unable to maintain its position due to the magnitude of the ice loads, the operator would then ensure that the drill string and risers are pulled, there would be a controlled, safe disconnect from the seafloor, and the vessel would be moved. Since DP systems were designed to operate in open water, significant technology developments and modifications are required to enable operations in ice environments. Model testing and simulation—both in the development of an ice model and the visualization of mathematically based scenarios—are playing key roles in an applied research project underway in St. John’s, Newfoundland and Labrador. 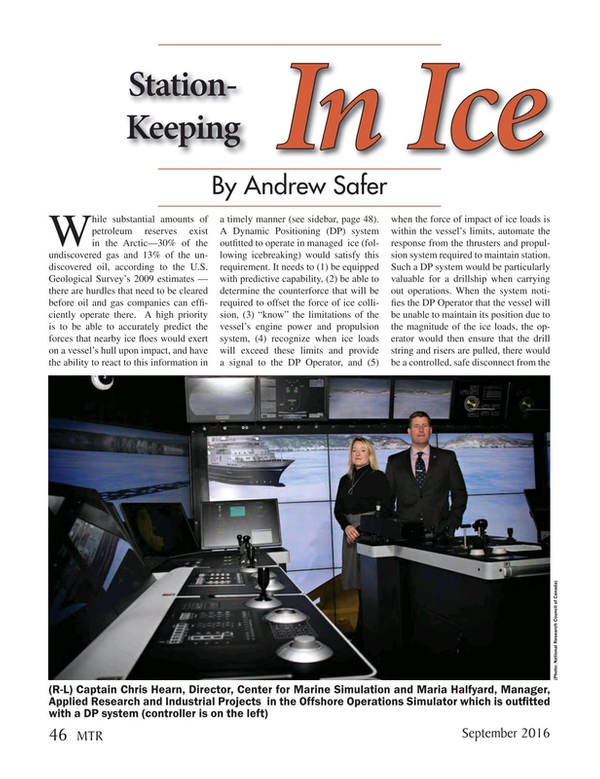