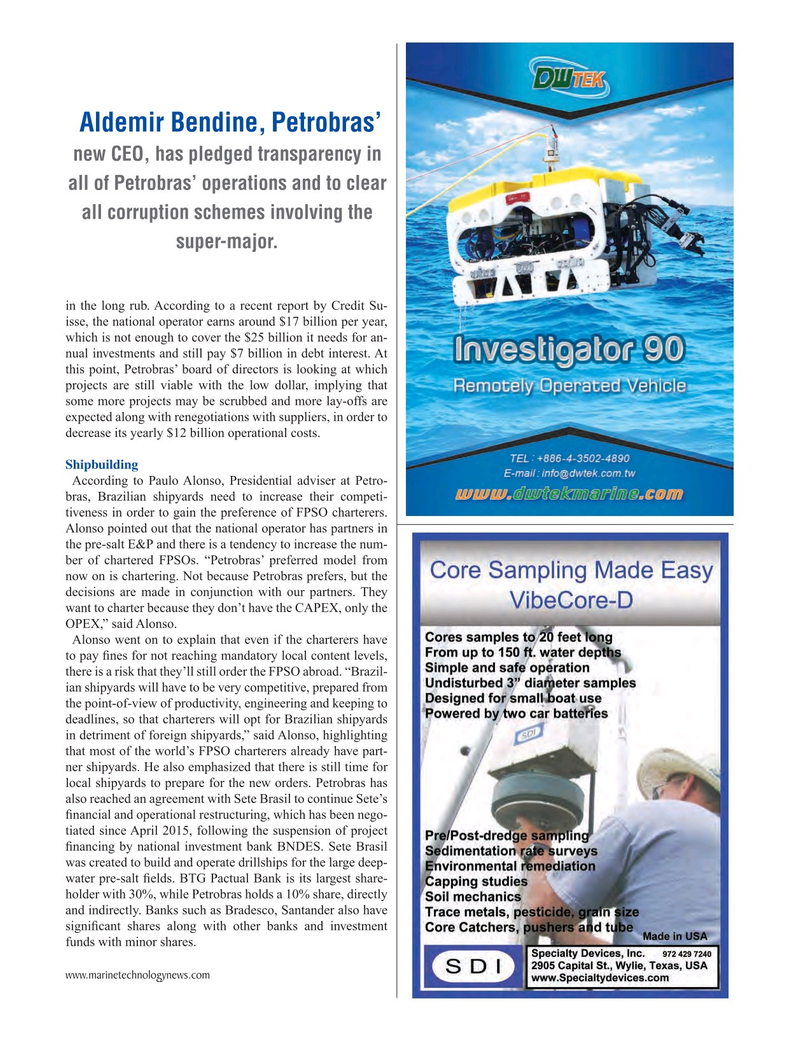 Aldemir Bendine,Petrobras’ new CEO, has pledged transparency in all of Petrobras’ operations and to clear all corruption schemes involving the super-major.

in the long rub. According to a recent report by Credit Su- isse, the national operator earns around $17 billion per year, which is not enough to cover the $25 billion it needs for an- nual investments and still pay $7 billion in debt interest. At this point, Petrobras’ board of directors is looking at which projects are still viable with the low dollar, implying that some more projects may be scrubbed and more lay-offs are expected along with renegotiations with suppliers, in order to decrease its yearly $12 billion operational costs.

According to Paulo Alonso, Presidential adviser at Petro- bras, Brazilian shipyards need to increase their competi- tiveness in order to gain the preference of FPSO charterers.

Alonso pointed out that the national operator has partners in the pre-salt E&P and there is a tendency to increase the num- ber of chartered FPSOs. “Petrobras’ preferred model from now on is chartering. Not because Petrobras prefers, but the decisions are made in conjunction with our partners. They want to charter because they don’t have the CAPEX, only the

Alonso went on to explain that even if the charterers have to pay ? nes for not reaching mandatory local content levels, there is a risk that they’ll still order the FPSO abroad. “Brazil- ian shipyards will have to be very competitive, prepared from the point-of-view of productivity, engineering and keeping to deadlines, so that charterers will opt for Brazilian shipyards in detriment of foreign shipyards,” said Alonso, highlighting that most of the world’s FPSO charterers already have part- ner shipyards. He also emphasized that there is still time for local shipyards to prepare for the new orders. Petrobras has also reached an agreement with Sete Brasil to continue Sete’s ? nancial and operational restructuring, which has been nego- tiated since April 2015, following the suspension of project ? nancing by national investment bank BNDES. Sete Brasil was created to build and operate drillships for the large deep- water pre-salt ? elds. BTG Pactual Bank is its largest share- holder with 30%, while Petrobras holds a 10% share, directly and indirectly. Banks such as Bradesco, Santander also have signi? cant shares along with other banks and investment funds with minor shares. www.marinetechnologynews.com