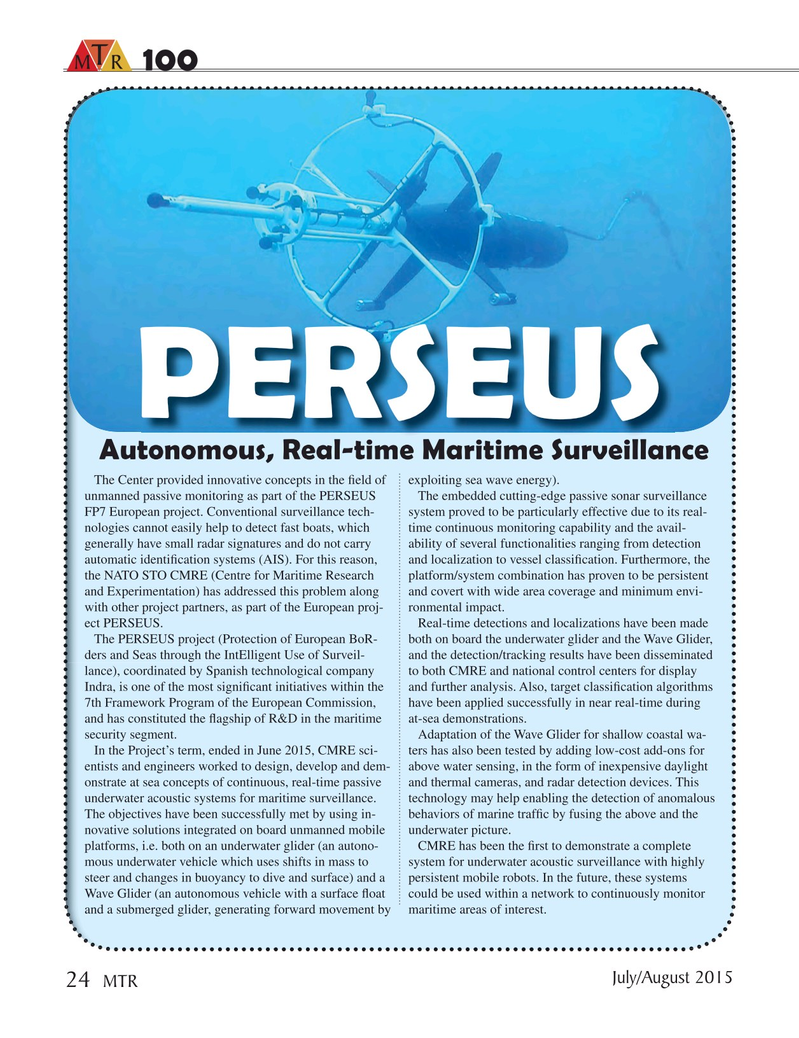 FP7 European project. Conventional surveillance tech- system proved to be particularly effective due to its real- nologies cannot easily help to detect fast boats, which time continuous monitoring capability and the avail- generally have small radar signatures and do not carry ability of several functionalities ranging from detection automatic identi? cation systems (AIS). For this reason, and localization to vessel classi? cation. Furthermore, the the NATO STO CMRE (Centre for Maritime Research platform/system combination has proven to be persistent and Experimentation) has addressed this problem along and covert with wide area coverage and minimum envi- with other project partners, as part of the European proj- ronmental impact. ect PERSEUS. Real-time detections and localizations have been made

The PERSEUS project (Protection of European BoR- both on board the underwater glider and the Wave Glider, ders and Seas through the IntElligent Use of Surveil- and the detection/tracking results have been disseminated lance), coordinated by Spanish technological company to both CMRE and national control centers for display

Indra, is one of the most signi? cant initiatives within the and further analysis. Also, target classi? cation algorithms 7th Framework Program of the European Commission, have been applied successfully in near real-time during and has constituted the ? agship of R&D in the maritime at-sea demonstrations. security segment. Adaptation of the Wave Glider for shallow coastal wa-

In the Project’s term, ended in June 2015, CMRE sci- ters has also been tested by adding low-cost add-ons for entists and engineers worked to design, develop and dem- above water sensing, in the form of inexpensive daylight onstrate at sea concepts of continuous, real-time passive and thermal cameras, and radar detection devices. This underwater acoustic systems for maritime surveillance. technology may help enabling the detection of anomalous

The objectives have been successfully met by using in- behaviors of marine traf? c by fusing the above and the novative solutions integrated on board unmanned mobile underwater picture.

platforms, i.e. both on an underwater glider (an autono- CMRE has been the ? rst to demonstrate a complete mous underwater vehicle which uses shifts in mass to system for underwater acoustic surveillance with highly steer and changes in buoyancy to dive and surface) and a persistent mobile robots. In the future, these systems

Wave Glider (an autonomous vehicle with a surface ? oat could be used within a network to continuously monitor and a submerged glider, generating forward movement by maritime areas of interest.