Valeport is using Ocean Business as the launch platform for a new sound velocity profiler, which will be on show for the first time at the show.  Valeport’s latest addition to its portfolio of sound velocity sensors and profilers is the SWIFT SVP.  This new compact unit will feature high accuracy SV, pressure and temperature, plus integral GPS to geo-located every profile.  Data can be easily and quickly downloaded, reviewed and translated to common SVP formats wirelessly via Bluetooth Smart using the free SWIFT APP on iOS devices.  The data can also be instantly shared via FTP, email and cloud services. With a battery endurance of up to a week and easy charging via USB, the SWIFT SVP is intended for coastal, harbor and inland hydrographic survey use and is designed to offer the highest quality sound velocity profiles in a compact, robust and portable package.
Valeport also showcased:
•     Ultra Sensors – the new ultraSV and ultraP are the next generation of sound velocity and pressure sensors from Valeport.
•     Hyperion Fluorometers –  The new range of optical sensors with the launch of a Fluorometer for measurement of Chlorophyll and Fluoresceine.
•     miniCTD Fast Profiler –  An evolution of Valeport’s miniCTD, the Fast Profiler has been designed to deliver the highest quality CTD casts at rapid drop rates.
www.valeport.co.uk 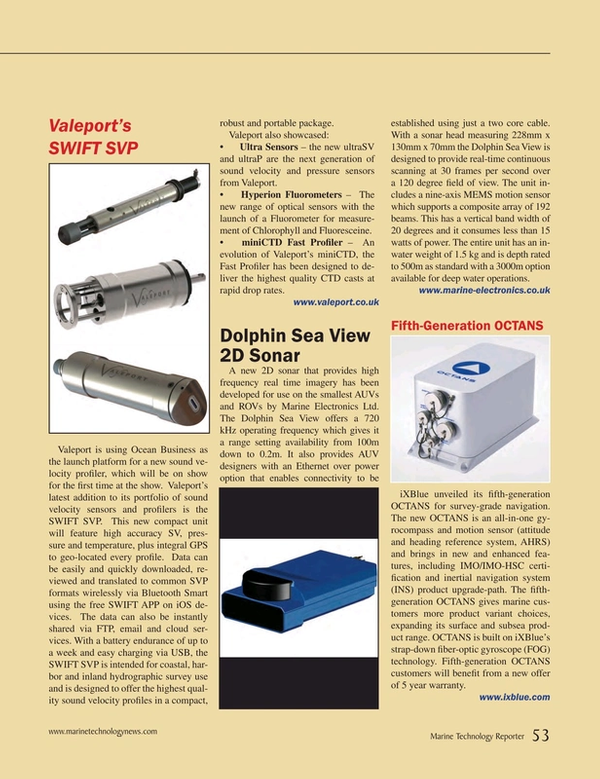