The new Powertrack subsea power cable tracker was launched by Teledyne TSS at Ocean Business to close a gap in the offshore survey industry’s inventory of marine detection technology. The company’s research department has now overcome the problem of tracking live power cables by developing a system that is capable of detecting the harmonics of AC tones in all AC and DC utility cables whether they are three or single phase and the same system can detect them regardless of whether they are carrying power or not. Unlike pipelines, cables have a much smaller metallic profile which makes them considerably harder to detect. This problem is overcome by the TSS 350 which can monitor a detectable tone that has been injected into the cable. However this is not an option if the cable is in use delivering electrical power so Powertrack has been designed as an enhanced version of the TSS 350 that is able to operate over a wider range of frequencies.
The new system has been developed so that it can now cover the higher-order harmonics of the grid frequency. This frequency delivers increased capability for detecting the harmonics of AC tones in all powered and unpowered three-phase and single-phase AC and DC utility cables. This detection capability takes advantage of the inherent embedded power transmission characteristics of the installation. The complete Powertrack assembly weighs 17 kg in air and is depth rated to 3000-m where it is capable of detecting a cable at a vertical range of up to 10m and within a total horizontal swath width, centered on the coil array, of 20m.
www.teledyne-tss.co.uk 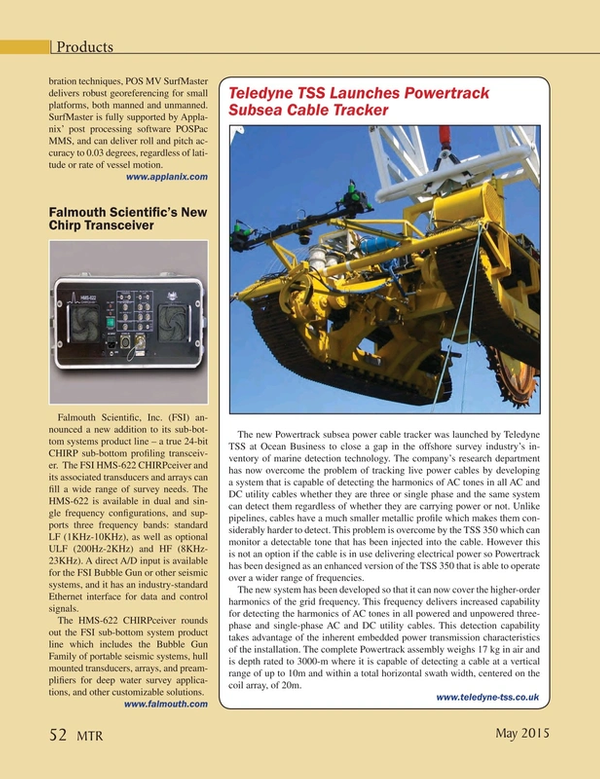