Teledyne Oceanscience, in partnership with Teledyne Odom Hydrographic, unveiled the first public demonstration of a multibeam echosounder-equipped Z-Boat 1800 autonomous remote survey boat at the U.S. Hydro 2015 Conference. The 1.8-meter distinctive yellow survey boat is found in action all over the world conducting single-beam surveys in rivers, lakes and industrial water. The Z-Boat is typically used when access is restricted or conditions are unsafe for a manned vessel. Adding a multibeam echosounder allows users to expand the range of surveying tasks that can be undertaken with the boat to conduct detailed engineering surveys, river scour surveys and infrastructure inspection. The new Z-Boat may be manually controlled from the shore or operated autonomously using a waypoint navigation / line following system developed in partnership with MSubs Ltd. (UK).
Conference attendees were able to drive the Z-Boat using the manual shore control system and simultaneously observe their survey tracks and bathymetry data on the shore PC. With the Teledyne Odom MB1 on board, up to 512 beams may be configured in a 120deg swath, representing a potentially enormous improvement in data availability versus the previous single-beam sonar options. With on-board computing powering the multibeam echosounder, and HYPACK running on the Z-Boat PC, this combination opens the prospect of adding further instruments and sensors for simultaneously collected georeferenced datasets.
For example, LiDAR imagery may be gathered from the Z-Boat for water level inspection of surface and sub-surface topography. With alternate Z-Boat configurations and telemetry options for other compact multibeam echosounders, users are able to match their choice of sonar with available Z-Boat deployment systems.
www.oceanscience.com 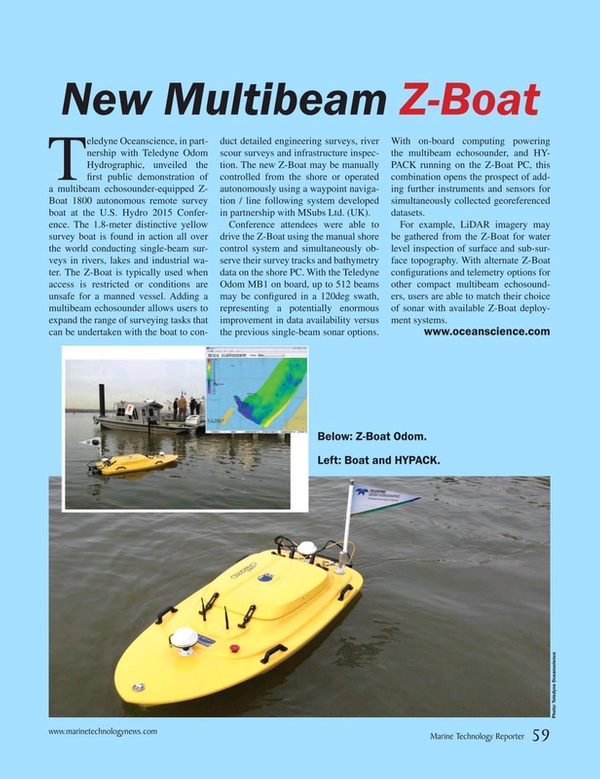