Increase in Demand for the Hot Subsea Vessel Market

Douglas-Westwood (DW), in its latest subsea vessels report, forecast more than $100B of expenditure on subsea vessel operations over the next five years – with global demand expected to increase by 23%. The increase in expenditure is expected to be higher than the growth in vessel days due to the move towards higher specification vessels to cater for deeper and more complicated field development programs.
Dayrates for high specification dive support vessels (DSV) and multipurpose support vessels (MSV) are expected to increase more than 40% by 2017. High spec flexlay dayrates are expected to remain similar and low spec decrease marginally. Pipelay vessel rates are expected to increase by up to 8% for high spec, whilst light well intervention vessel (LWIV) rates are anticipated to increase slightly.
The deepwater Golden Triangle (Africa, GoM and Brazilian areas) is expected to account for the majority of global expenditure on vessel operations over the forecast period. North America is forecast to be the largest market followed by Latin America and Africa.

Drivers and Indicators
Global energy demand has grown significantly over the past 50 years and is forecast to continue, driven by developing economies. Oil is a fuel of huge importance mainly due to its role in transportation, where it cannot be readily substituted by alternative energy sources. Oil consumption is forecast to grow from today’s 90 million barrels per day to 107mbpd by 2035. Production will increasingly have to come from unconventional sources and also deeper water. This will cause all sectors of the subsea market to increase in tandem. With the anticipated growth in offshore developments, there are more opportunities for subsea vessels to be used and due to the move towards deep and ultra-deep waters, the need for higher specification vessels is looking particularly positive.

Market Supply
The move towards deeper water activities has rendered some older vessels inadequate. Saturation of sections of the market, particularly for some DSV/MSV types is now evident, with some retention of high demand for flexlay/pipelay vessels.
DW expects an upside trend of activity in vessels supply. This is largely due to the move towards building higher capability vessels to cater for deeper water activities, but also the retiring of less capable vessels and meeting increasing demand in Latin America, Africa and Asia.

Africa
Africa will remain one of the world’s most significant regions for subsea developments. A large number are currently onstream and more are planned for the forecast period. Projects such as Total’s Kizomba field in Angola (2014), Shell’s Bonga South in West Nigeria (2015) and Total’s Egina field in Nigeria (2014), will increase the demand for subsea vessels. Total vessel operations expenditure over the 2013-2017 period is in the $16B region, a significant increase from the preceding five years, and is anticipated to be largely driven by the deepwater region requiring higher specification vessels.

Asia
Over the next five years, field development activities in the Asian region will also increasingly require vessels with deepwater capabilities. Production has, until recently, been restricted to shallow water fields, but there are now a number of deepwater projects producing or underway. Vessel demand is expected to see strong growth with developments such as Shell’s Gumusut (Malaysia), Chevron’s Gehem and Gendalo (Indonesia), Salamander’s Bualuang (Thailand), Reliance Industries’ MA-D6 (India) and CNOOC’s Xijiang 32-1 (China). Expenditure is expected to increase by a CAGR of 11% over the next five years.

Australasia
Australia’s offshore oil & gas reserves are found in the Bonaparte, Browse and Canarvon Basins off the west coast, as well as in the Otway, Bass and Gippsland Basins off the southern coast. Large shallow water gas developments will continue to dominate subsea activities off the west coast of Australia until 2016. There are no visible projects in 2017, but major projects are due to come onstream beyond the forecast period. Field development will account for the largest demand in the region followed by IRM.

Latin America
High specification vessels are required as this region continues to develop deepwater assets and move towards ultra deepwater (>2,000m) such as Petrobras’ pre-salt basins. A large amount of deepwater production has already occurred in Latin America with the vast majority off Brazil. Companies active include BG, BP, Chevron, Devon Energy, Petrogal/Galp, El Paso, Pemex (Mexico NOC), PDVSA (Venezuela NOC), Petrobras (Brazil NOC), Repsol, Shell, Statoil and Total. Expenditure in Latin America was left relatively unscathed by the economic downturn.
The region is expected to have the largest vessel spend led primarily by Brazil, and is forecast to grow strongly, accelerating from 2014 due to an increase in field development activity. Vessel day demand from 2013-2017 is expected to increase by more than 65% from the prevailing five year period.

Middle East
Subsea expenditure in the region will continue to be driven by shallow pipelines and fixed platforms, with just one subsea tree slated to be installed from 2013-2017. Beyond that time, spending is expected to be driven by the three deepwater fields all of which are located off Israel. Meanwhile the Middle East has a relatively small base of subsea infrastructure, and there are no visible field development projects over the forecast period with vessel demand mainly coming from pipeline projects.
The region is expected to have a relatively low spend, some 4% of the global total.

North America
Over the next five years subsea expenditure in the region is expected to be dominated by deepwater developments, predominately in the U.S. Gulf of Mexico (GoM). North America will also remain one of the world’s most significant regions for subsea vessel demand and expenditure due to the IRM needs of the massive installed base of offshore infrastructure. Total expenditure from 2013-2017 is expected to be the largest of all the regions.

Norway
Norway is a mature region, with much shallow water production but little deepwater activity to date and expenditure will therefore arise from projects in water depths of 250-500m. In total, vessel spend is set to decrease by a CAGR of 2% over the forecast period. This is due to the lack of visibility of pipeline construction projects in 2017. Vessel demand is forecast to peak in 2016 due to an anticipated increase in pipeline activity that year. Overall activity in the next five years is expected to be driven by IRM as field developments and pipeline activity fluctuate.

U.K.
The U.K. is a mature region, with much shallow water production and field developments that utilize subsea trees are typically tied back to existing infrastructure. Shallow water developments will continue to dominate U.K. subsea expenditure. Being a mature market, vessel demand is greatly driven by IRM activities on existing infrastructure. Over the forecast five-year period, expenditure and vessel demand for both IRM and field development will account for over 45% of the total.

RoWE
The Rest of Western Europe is also a mature region, with shallow water production and little deepwater activity to date. However, there are potential deepwater gas developments in the waters of the eastern Mediterranean. Apart from those, the maturity of the infrastructure in the region means that IRM plays a significant role in vessel demand.

Conclusions
Global demand for subsea vessel operations is expected to grow rapidly over the forecast period particularly for the higher specification vessels. With the move to deeper waters, the requirements for vessels with a longer duration on site and with higher technical and operational capabilities are increasing, giving rise to higher expenditure forecasts. The outlook for the subsea vessel operations market shows good long-term growth potential, particularly in North America, Latin America, Africa and Asia-Pacific.


The Author
Calvin Ling BEng (Hons), MSc, Douglas-Westwood, Singapore is involved with the day to day execution of strategic consulting & transaction support services for a range of corporate and financial clients within the energy and oil & gas industry. Prior to joining DW, he has spent time as an executive analyst in an Asian investment banking firm focusing on the South East Asia M&A and IPO market. Calvin holds a Bachelors in Engineering (Hons) (Civil) and a Master of Science (MSc) (Geotechnical Engineering and Management) from the University of Birmingham, U.K.

(As published in the October 2013 edition of Marine Technology Reporter - www.seadiscovery.com) 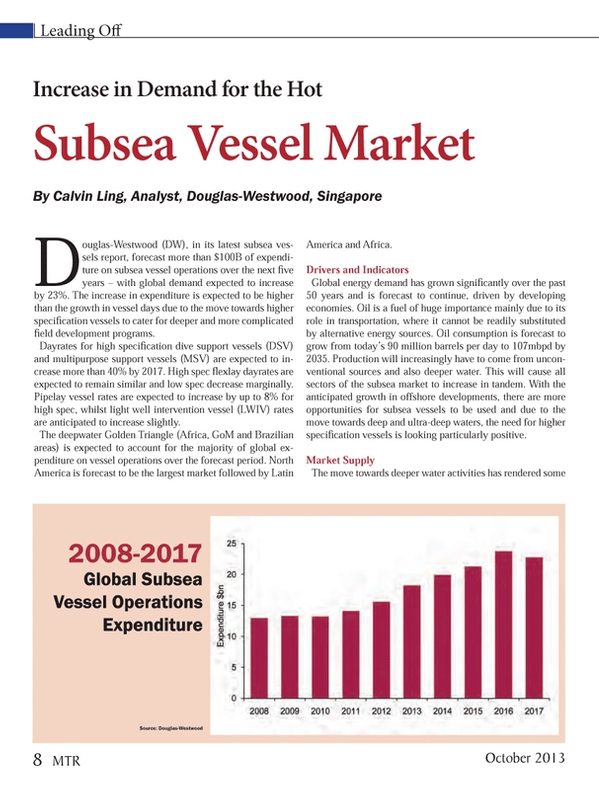 Read Increase in Demand for the Hot Subsea Vessel Market in Pdf, Flash or Html5 edition of October 2013 Marine Technology