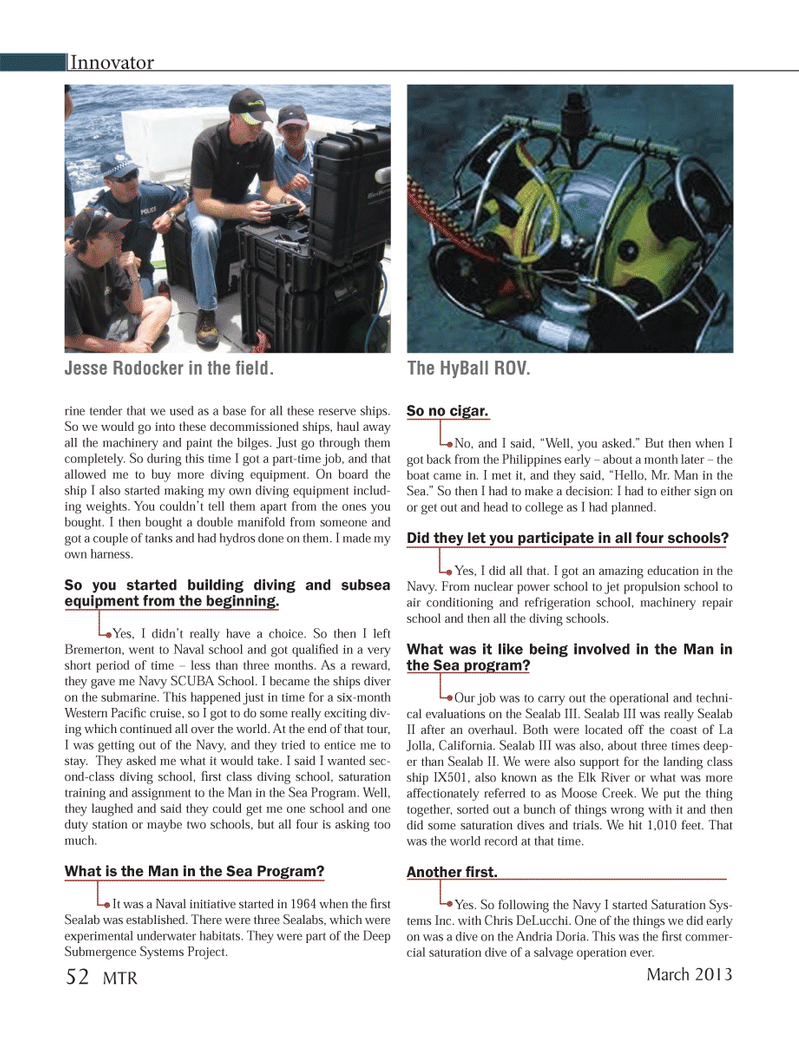 Innovator rine tender that we used as a base for all these reserve ships. So we would go into these decommissioned ships, haul away all the machinery and paint the bilges. Just go through them completely. So during this time I got a part-time job, and that allowed me to buy more diving equipment. On board the ship I also started making my own diving equipment includ- ing weights. You couldn?t tell them apart from the ones you bought. I then bought a double manifold from someone and got a couple of tanks and had hydros done on them. I made my own harness. So you started building diving and subsea equipment from the beginning. Yes, I didn?t really have a choice. So then I left Bremerton, went to Naval school and got quali ed in a very short period of time ? less than three months. As a reward, they gave me Navy SCUBA School. I became the ships diver on the submarine. This happened just in time for a six-month Western Paci c cruise, so I got to do some really exciting div- ing which continued all over the world. At the end of that tour, I was getting out of the Navy, and they tried to entice me to stay. They asked me what it would take. I said I wanted sec- ond-class diving school,  rst class diving school, saturation training and assignment to the Man in the Sea Program. Well, they laughed and said they could get me one school and one duty station or maybe two schools, but all four is asking too much. What is the Man in the Sea Program? It was a Naval initiative started in 1964 when the  rst Sealab was established. There were three Sealabs, which were experimental underwater habitats. They were part of the Deep Submergence Systems Project. So no cigar. No, and I said, ?Well, you asked.? But then when I got back from the Philippines early ? about a month later ? the boat came in. I met it, and they said, ?Hello, Mr. Man in the Sea.? So then I had to make a decision: I had to either sign on or get out and head to college as I had planned. Did they let you participate in all four schools? Yes, I did all that. I got an amazing education in the Navy. From nuclear power school to jet propulsion school to air conditioning and refrigeration school, machinery repair school and then all the diving schools. What was it like being involved in the Man in the Sea program? Our job was to carry out the operational and techni- cal evaluations on the Sealab III. Sealab III was really Sealab II after an overhaul. Both were located off the coast of La Jolla, California. Sealab III was also, about three times deep- er than Sealab II. We were also support for the landing class ship IX501, also known as the Elk River or what was more affectionately referred to as Moose Creek. We put the thing together, sorted out a bunch of things wrong with it and then did some saturation dives and trials. We hit 1,010 feet. That was the world record at that time. Another Þ rst. Yes. So following the Navy I started Saturation Sys- tems Inc. with Chris DeLucchi. One of the things we did early on was a dive on the Andria Doria. This was the  rst commer- cial saturation dive of a salvage operation ever. Jesse Rodocker in the Þ eld. The HyBall ROV. March 2013 52 MTRMTR #2 (50-65).indd 52MTR #2 (50-65).indd 523/6/2013 1:43:36 PM3/6/2013 1:43:36 PM