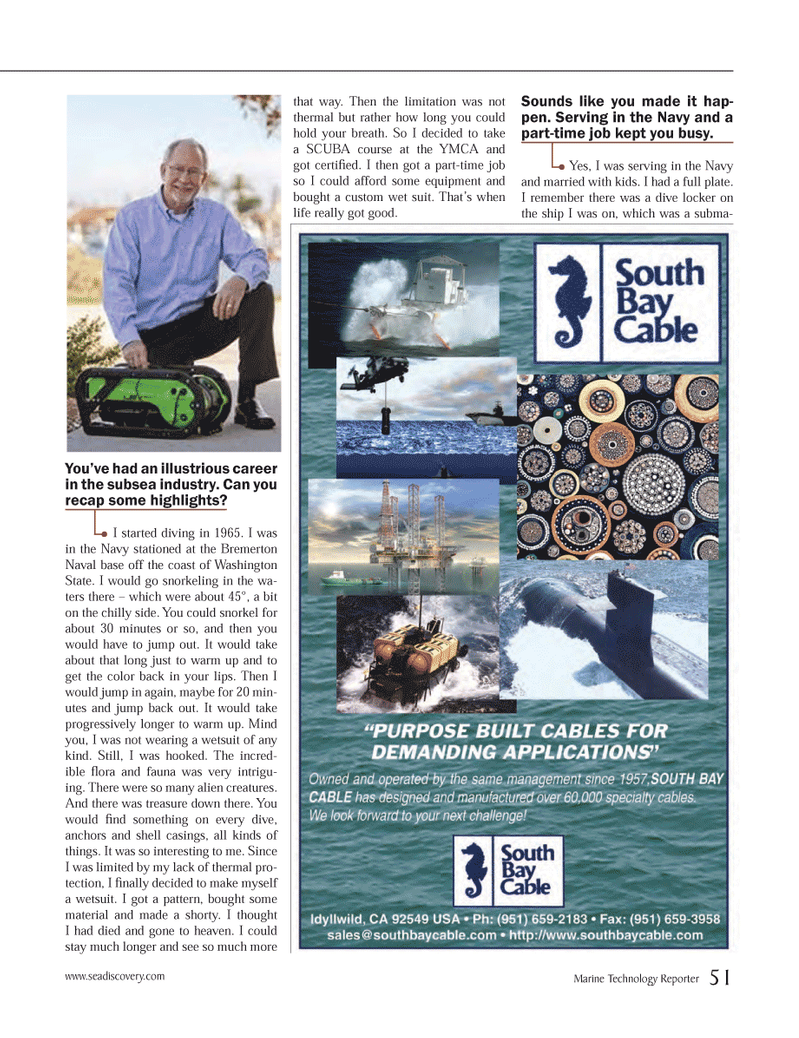 You?ve had an illustrious career in the subsea industry. Can you recap some highlights? I started diving in 1965. I was in the Navy stationed at the Bremerton Naval base off the coast of Washington State. I would go snorkeling in the wa- ters there ? which were about 45°, a bit on the chilly side. You could snorkel for about 30 minutes or so, and then you would have to jump out. It would take about that long just to warm up and to get the color back in your lips. Then I would jump in again, maybe for 20 min- utes and jump back out. It would take progressively longer to warm up. Mind you, I was not wearing a wetsuit of any kind. Still, I was hooked. The incred- ible  ora and fauna was very intrigu- ing. There were so many alien creatures. And there was treasure down there. You would  nd something on every dive, anchors and shell casings, all kinds of things. It was so interesting to me. Since I was limited by my lack of thermal pro- tection, I  nally decided to make myself a wetsuit. I got a pattern, bought some material and made a shorty. I thought I had died and gone to heaven. I could stay much longer and see so much more that way. Then the limitation was not thermal but rather how long you could hold your breath. So I decided to take a SCUBA course at the YMCA and got certi ed. I then got a part-time job so I could afford some equipment and bought a custom wet suit. That?s when life really got good. Sounds like you made it hap- pen. Serving in the Navy and a part-time job kept you busy. Yes, I was serving in the Navy and married with kids. I had a full plate. I remember there was a dive locker on the ship I was on, which was a subma- www.seadiscovery.com Marine Technology Reporter 51MTR #2 (50-65).indd 51MTR #2 (50-65).indd 513/6/2013 2:27:13 PM3/6/2013 2:27:13 PM