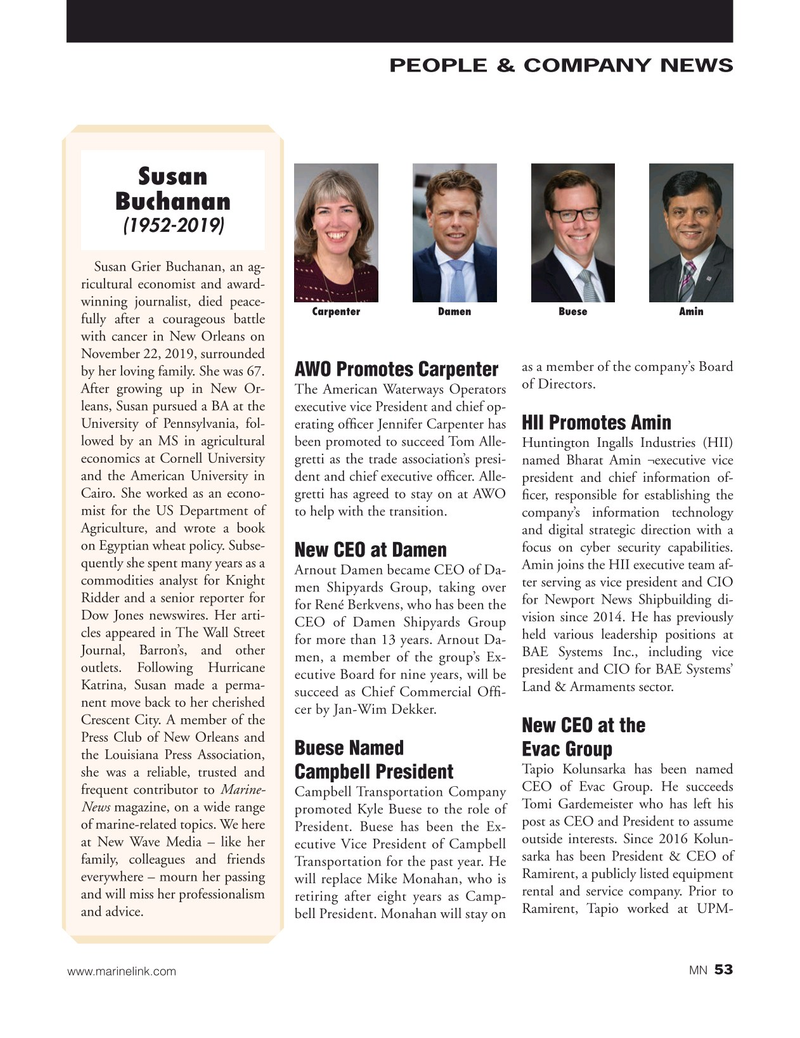 After growing up in New Or-

The American Waterways Operators of Directors.

leans, Susan pursued a BA at the executive vice President and chief op-

University of Pennsylvania, fol- erating of? cer Jennifer Carpenter has

Cairo. She worked as an econo- gretti has agreed to stay on at AWO ? cer, responsible for establishing the mist for the US Department of to help with the transition. company’s information technology

Agriculture, and wrote a book and digital strategic direction with a on Egyptian wheat policy. Subse- focus on cyber security capabilities.

New CEO at Damen quently she spent many years as a

Ridder and a senior reporter for for René Berkvens, who has been the for Newport News Shipbuilding di-

CEO of Damen Shipyards Group vision since 2014. He has previously cles appeared in The Wall Street held various leadership positions at for more than 13 years. Arnout Da-

Journal, Barron’s, and other

BAE Systems Inc., including vice men, a member of the group’s Ex- outlets. Following Hurricane ecutive Board for nine years, will be president and CIO for BAE Systems’

Katrina, Susan made a perma-

succeed as Chief Commercial Of? - nent move back to her cherished cer by Jan-Wim Dekker.

Crescent City. A member of the

New CEO at the

Press Club of New Orleans and

Tapio Kolunsarka has been named she was a reliable, trusted and

News magazine, on a wide range promoted Kyle Buese to the role of Tomi Gardemeister who has left his post as CEO and President to assume of marine-related topics. We here

President. Buese has been the Ex- at New Wave Media – like her ecutive Vice President of Campbell outside interests. Since 2016 Kolun- family, colleagues and friends

Transportation for the past year. He sarka has been President & CEO of everywhere – mourn her passing will replace Mike Monahan, who is Ramirent, a publicly listed equipment rental and service company. Prior to and will miss her professionalism retiring after eight years as Camp- and advice.