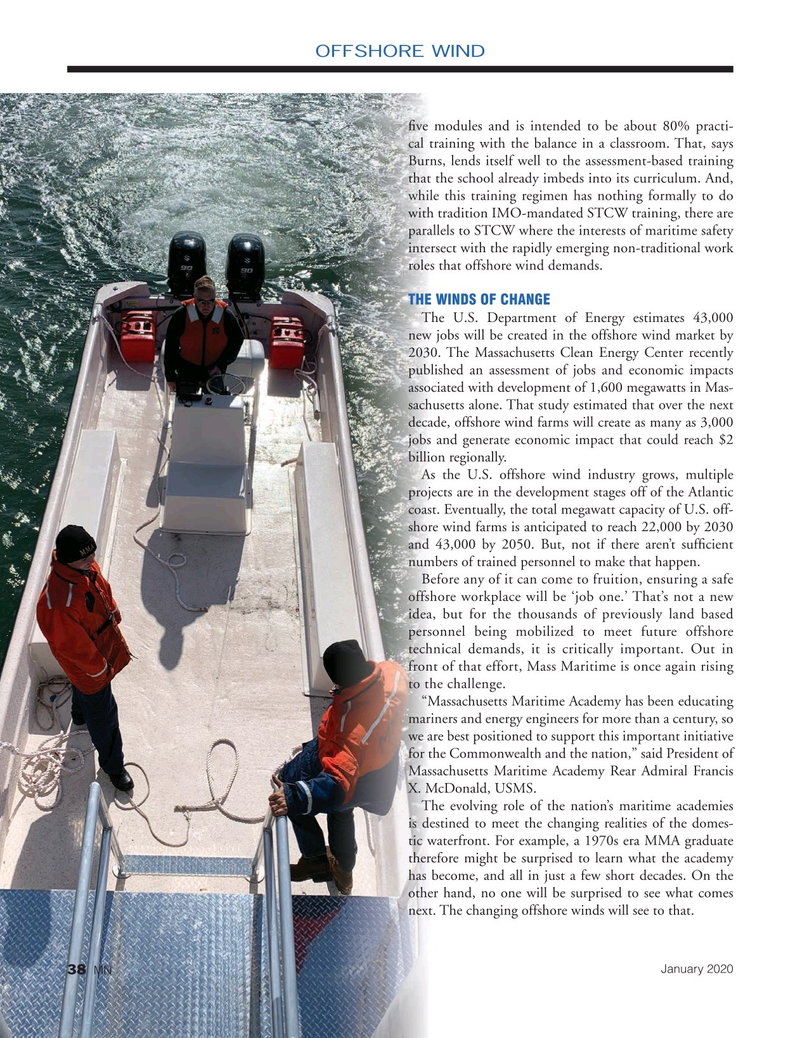 OFFSHORE WIND ? ve modules and is intended to be about 80% practi- cal training with the balance in a classroom. That, says

Burns, lends itself well to the assessment-based training that the school already imbeds into its curriculum. And, while this training regimen has nothing formally to do with tradition IMO-mandated STCW training, there are parallels to STCW where the interests of maritime safety intersect with the rapidly emerging non-traditional work roles that offshore wind demands.

THE WINDS OF CHANGE

The U.S. Department of Energy estimates 43,000 new jobs will be created in the offshore wind market by 2030. The Massachusetts Clean Energy Center recently published an assessment of jobs and economic impacts associated with development of 1,600 megawatts in Mas- sachusetts alone. That study estimated that over the next decade, offshore wind farms will create as many as 3,000 jobs and generate economic impact that could reach $2 billion regionally.

As the U.S. offshore wind industry grows, multiple projects are in the development stages off of the Atlantic coast. Eventually, the total megawatt capacity of U.S. off- shore wind farms is anticipated to reach 22,000 by 2030 and 43,000 by 2050. But, not if there aren’t suf? cient numbers of trained personnel to make that happen.

Before any of it can come to fruition, ensuring a safe offshore workplace will be ‘job one.’ That’s not a new idea, but for the thousands of previously land based personnel being mobilized to meet future offshore technical demands, it is critically important. Out in front of that effort, Mass Maritime is once again rising to the challenge. “Massachusetts Maritime Academy has been educating mariners and energy engineers for more than a century, so we are best positioned to support this important initiative for the Commonwealth and the nation,” said President of

The evolving role of the nation’s maritime academies is destined to meet the changing realities of the domes- tic waterfront. For example, a 1970s era MMA graduate therefore might be surprised to learn what the academy has become, and all in just a few short decades. On the other hand, no one will be surprised to see what comes next. The changing offshore winds will see to that.