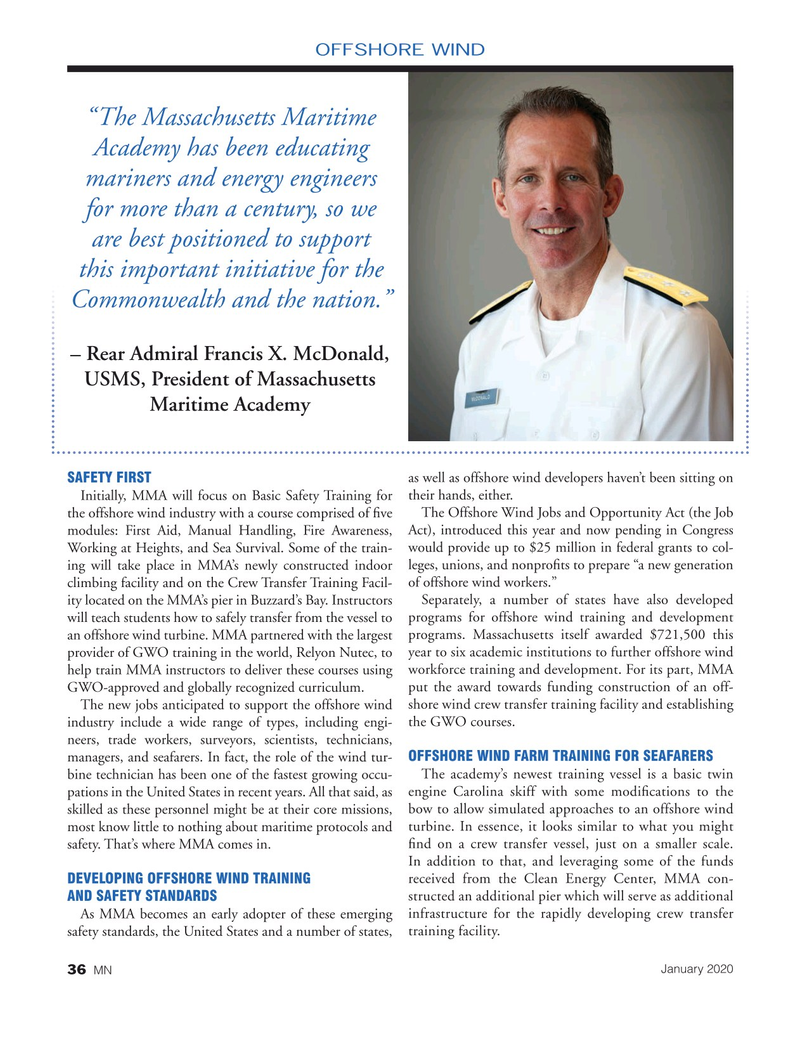 Academy has been educating mariners and energy engineers for more than a century, so we are best positioned to support this important initiative for the

Initially, MMA will focus on Basic Safety Training for their hands, either.

Working at Heights, and Sea Survival. Some of the train- would provide up to $25 million in federal grants to col- ing will take place in MMA’s newly constructed indoor leges, unions, and nonpro? ts to prepare “a new generation climbing facility and on the Crew Transfer Training Facil- of offshore wind workers.” ity located on the MMA’s pier in Buzzard’s Bay. Instructors Separately, a number of states have also developed will teach students how to safely transfer from the vessel to programs for offshore wind training and development an offshore wind turbine. MMA partnered with the largest programs. Massachusetts itself awarded $721,500 this provider of GWO training in the world, Relyon Nutec, to year to six academic institutions to further offshore wind help train MMA instructors to deliver these courses using workforce training and development. For its part, MMA

GWO-approved and globally recognized curriculum. put the award towards funding construction of an off-

The new jobs anticipated to support the offshore wind shore wind crew transfer training facility and establishing industry include a wide range of types, including engi- the GWO courses.

neers, trade workers, surveyors, scientists, technicians, managers, and seafarers. In fact, the role of the wind tur- OFFSHORE WIND FARM TRAINING FOR SEAFARERS bine technician has been one of the fastest growing occu- The academy’s newest training vessel is a basic twin pations in the United States in recent years. All that said, as engine Carolina skiff with some modi? cations to the skilled as these personnel might be at their core missions, bow to allow simulated approaches to an offshore wind most know little to nothing about maritime protocols and turbine. In essence, it looks similar to what you might safety. That’s where MMA comes in. ? nd on a crew transfer vessel, just on a smaller scale.

In addition to that, and leveraging some of the funds

As MMA becomes an early adopter of these emerging infrastructure for the rapidly developing crew transfer safety standards, the United States and a number of states, training facility.