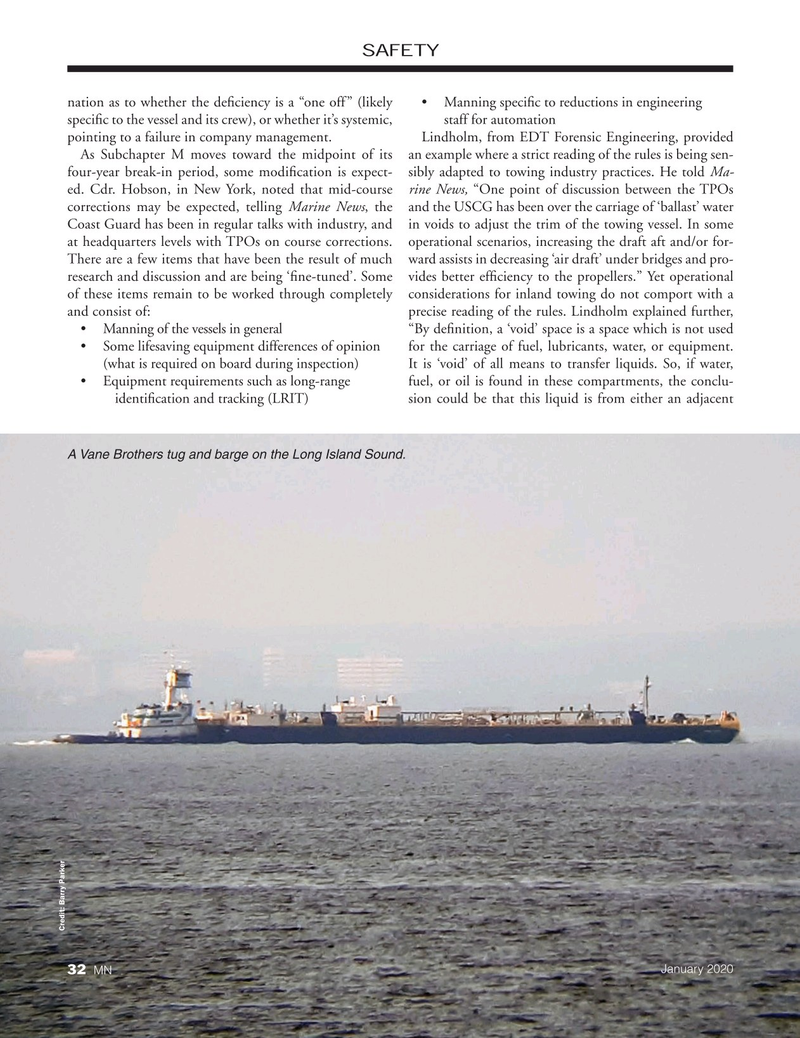 SAFETY nation as to whether the de? ciency is a “one off” (likely • Manning speci? c to reductions in engineering speci? c to the vessel and its crew), or whether it’s systemic, staff for automation pointing to a failure in company management. Lindholm, from EDT Forensic Engineering, provided

As Subchapter M moves toward the midpoint of its an example where a strict reading of the rules is being sen- four-year break-in period, some modi? cation is expect- sibly adapted to towing industry practices. He told Ma- ed. Cdr. Hobson, in New York, noted that mid-course rine News, “One point of discussion between the TPOs corrections may be expected, telling Marine News, the and the USCG has been over the carriage of ‘ballast’ water

Coast Guard has been in regular talks with industry, and in voids to adjust the trim of the towing vessel. In some at headquarters levels with TPOs on course corrections. operational scenarios, increasing the draft aft and/or for-

There are a few items that have been the result of much ward assists in decreasing ‘air draft’ under bridges and pro- research and discussion and are being ‘? ne-tuned’. Some vides better ef? ciency to the propellers.” Yet operational of these items remain to be worked through completely considerations for inland towing do not comport with a and consist of: precise reading of the rules. Lindholm explained further, • Manning of the vessels in general “By de? nition, a ‘void’ space is a space which is not used • Some lifesaving equipment differences of opinion for the carriage of fuel, lubricants, water, or equipment. (what is required on board during inspection) It is ‘void’ of all means to transfer liquids. So, if water, • Equipment requirements such as long-range fuel, or oil is found in these compartments, the conclu- identi? cation and tracking (LRIT) sion could be that this liquid is from either an adjacent

A Vane Brothers tug and barge on the Long Island Sound.