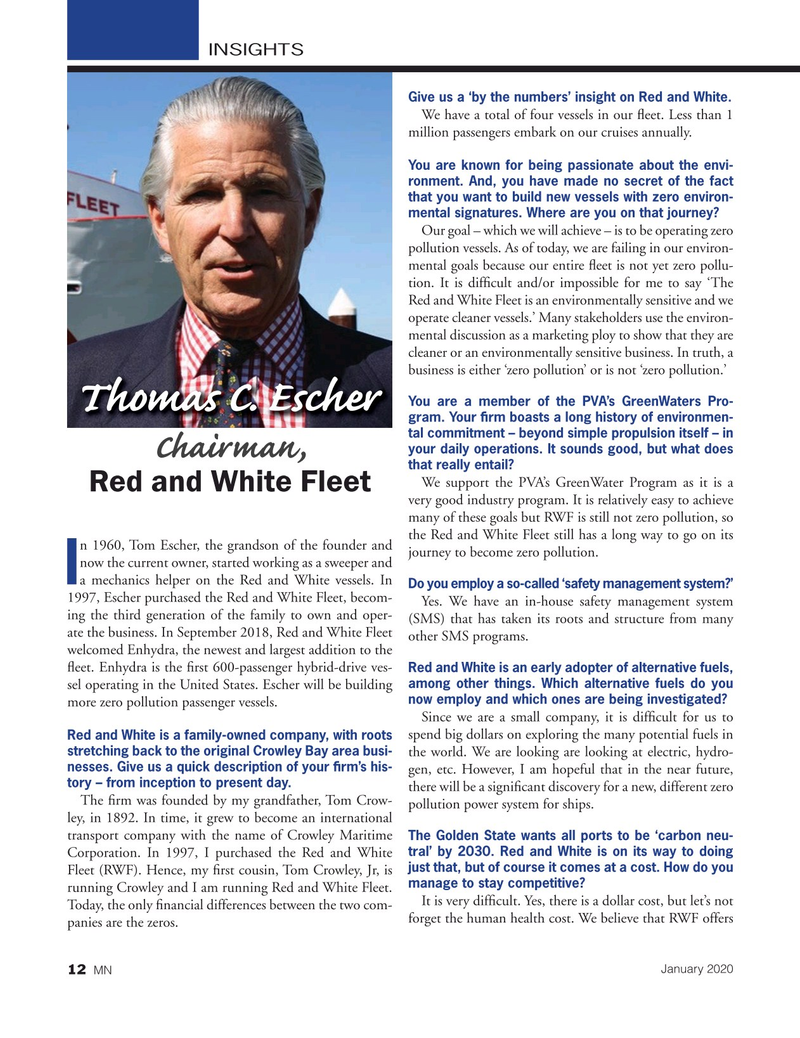 Give us a ‘by the numbers’ insight on Red and White.

We have a total of four vessels in our ? eet. Less than 1 million passengers embark on our cruises annually.

You are known for being passionate about the envi- ronment. And, you have made no secret of the fact that you want to build new vessels with zero environ- mental signatures. Where are you on that journey?

Our goal – which we will achieve – is to be operating zero pollution vessels. As of today, we are failing in our environ- mental goals because our entire ? eet is not yet zero pollu- tion. It is dif? cult and/or impossible for me to say ‘The

You are a member of the PVA’s GreenWaters Pro-

Thomas C. Escher gram. Your ? rm boasts a long history of environmen- tal commitment – beyond simple propulsion itself – in your daily operations. It sounds good, but what does

We support the PVA’s GreenWater Program as it is a

now the current owner, started working as a sweeper and

Ia mechanics helper on the Red and White vessels. In

Do you employ a so-called ‘safety management system?’ 1997, Escher purchased the Red and White Fleet, becom-

Yes. We have an in-house safety management system ing the third generation of the family to own and oper- (SMS) that has taken its roots and structure from many ate the business. In September 2018, Red and White Fleet other SMS programs.

welcomed Enhydra, the newest and largest addition to the ? eet. Enhydra is the ? rst 600-passenger hybrid-drive ves-

Red and White is an early adopter of alternative fuels, among other things. Which alternative fuels do you sel operating in the United States. Escher will be building now employ and which ones are being investigated?

Since we are a small company, it is dif? cult for us to spend big dollars on exploring the many potential fuels in

Red and White is a family-owned company, with roots stretching back to the original Crowley Bay area busi- the world. We are looking are looking at electric, hydro- nesses. Give us a quick description of your ? rm’s his- gen, etc. However, I am hopeful that in the near future, tory – from inception to present day.

there will be a signi? cant discovery for a new, different zero

The ? rm was founded by my grandfather, Tom Crow- pollution power system for ships.

ley, in 1892. In time, it grew to become an international transport company with the name of Crowley Maritime

The Golden State wants all ports to be ‘carbon neu- tral’ by 2030. Red and White is on its way to doing

Corporation. In 1997, I purchased the Red and White just that, but of course it comes at a cost. How do you

running Crowley and I am running Red and White Fleet.

It is very dif? cult. Yes, there is a dollar cost, but let’s not

Today, the only ? nancial differences between the two com- forget the human health cost. We believe that RWF offers panies are the zeros.