Putting Palatka Back on the Map

Diverse and conveniently located, St. Johns Ship Building has quickly developed into a reliable partner for its many repeat customers. Today, and as a direct result, a lot more people know exactly where Palatka, Florida is located.

On the St Johns River, just 60 miles south of Jacksonville, lies the sleepy town of Palatka, Florida.  Founded as a trading post in 1821, its location on the highly navigable river made the area attractive to orange growers and timber men alike.

In its heyday between 1875 and 1900, Palatka – “the gateway to Florida's interior” – was a tourist destination with several posh hotels having the capacity to host up to 6,000 guests. Palatka was known in those days as “The Gem of the St Johns River.”  Unfortunately, the fire of 1884 destroyed the grand hotels. Deep freezes in 1894 and 1895 ruined the citrus groves. Commerce sadly declined.

Today, Palatka boasts a stable economy that is ready for commercial growth. It has a historic downtown business district with murals on many of its buildings and a beautiful waterfront park.  Just down the road from that park, if one were to venture west toward the historic Stokes Landing made memorable by William Bartram in his 18th Century explorations, at the end of the road, he or she would find the gates leading to one of Palatka's modern day commercial gems: St John's Ship Building.

Giant Tugs and Ferries Among the Pines
Nestled amid the pines and along the banks of the river, is the 98-acre, full-service shipbuilding and repair facility known as St. Johns Ship Building (SJSB). Founded in 2007, the President and Owner, Steven Ganoe, his management team, and craftsmen have steadily grown the operation into a capable shipbuilding and repair business. What began as a modest facility is now capable of drydocking vessels up to 1,100 tons, has over 1,800-feet of wet dock area, features a 425-foot by 75-foot fabrication shop, and 20,000 square foot Aluminum Assembly Building. They have earned an outstanding reputation for quality and workmanship and now routinely handle of a variety of products to include offshore supply vessels, aluminum construction, landing crafts, dive boats, tugs, barges and other types of vessels for both commercial and government operators. In other words, the perfect venue for workboat newbuilding and repairs.

The customers of SJSB are about 70 percent American owned. That’s not to say they can’t compete in the workboat export markets. They can and do. Ganoe says, “We have built vessels for four different countries, but we are always looking at growing markets.” Never fully dependent on the oil and gas market, it has been able to keep business steady during the downturn in that sector. Now aluminum offshore service vessels, especially for the offshore wind market present an opportunity the company is exploring.

Today, there are nine major boat-manufacturing projects in the carefully organized yard. One, all glossy in the river reflection, is a 95-foot, 350 passenger catamaran ferry designed by Incat-Crowther on its way to service a metropolitan area. She is the first of three that are currently under construction. Close by is the second of four new 152’x 52’x 12′, 150-passenger, 30-vehicle ferries. Designed by Seattle-based Elliott Bay Design Group, the new boats, featuring 8′ drafts, will also be able to handle concrete trucks. Both classes of ferries are very different in material choice, design and construction but each holds its own complexity and challenges that SJSB personnel have managed through.

Vane Brothers Pride
Although constrained by many confidentiality and nondisclosure agreements, the yard can talk about the eight, ocean-going tugs for The Vane Brothers Company, which has served the maritime industry in the Port of Baltimore and along the U.S. Eastern Seaboard since 1898. Today, the company has a fleet of nearly 150 tugboats and barges working out of seven East Coast locations. Eight of them are from SJSB.

Back in 2014, Vane’s Senior Port Captain Jim Demske and Property Manager D. Michael Barr were searching the Florida coast for a “hurricane hole” to find protection for a major storm when they visited St. Johns Ship Building. “The yard has a tremendous reputation and has constructed many of the barges we use in our Southern Fleet,” reports Demske, “We were happy to make a lasting business connection.”

After a meeting of the minds with Ganoe, General Manager, Bobby Barfield, and Senior Project Manager, Steve Torok, Vane suggested that SJSB build eight newly designed 4,200 horse power Elizabeth Anne Class tugboats. They were to be innovative and special, named as they were for Elizabeth Hughes, who is Vane Brothers’ Vice President, the mother of President C. Duff Hughes and the wife of former Vane Chairman Charles F. Hughes Jr.

For its part, Vane is effusive in its endorsement of SJSB products and service. “The 4,200 horsepower Elizabeth Anne Class tugboat is the ultimate workhorse, bringing exceptional power and performance to Vane’s growing fleet,” says Vane Brothers President C. Duff Hughes. “We are thrilled with the results coming out of St. Johns Ship Building, and we know that our crews appreciate the comfort, safety and efficiency that are built into each new towing vessel.”

Designed by Frank Basile, P.E. of Entech Designs, LLC, the Elizabeth Anne Class tugboat is a close cousin to Vane’s Basile-designed Patapsco Class tugboats, 15 of which were produced between 2004 and 2009. Measuring 100 feet long and 34 feet wide, with a hull depth of 15 feet, the model-bow Elizabeth Anne has two Caterpillar 3516 Tier 3 engines, each generating 2,100 horsepower at 1,600 rpm. The Elizabeth Anne also has Reintjes marine gears supplied by Karl Senner, LLC, Kenner, LA.

The Elizabeth Anne features the latest in solid-state, Simrad electronics and has handsomely appointed, mahogany upper and lower pilothouses, along with spacious accommodations for up to seven crewmembers. “The new tugs from St. Johns will incorporate many new features and niceties that will end up making these boats standouts and a pleasure to work, for sure,” Demske said. “The folks at Saint Johns are excited to build for the Vane fleet and they are anxious to show off the talents of some of these great Florida boat builders.”

The Elizabeth Anne is the 27th vessel completed for Vane Brothers under the supervision of Senior Port Captain Jim Demske, whose reputation for delivering superior tugboats that emphasize functionality, crew comfort and safety is widely recognized in the maritime industry.

“Midway through our contract with St. Johns Ship Building, we are thrilled with the high quality of the four Elizabeth Anne Class tugboats that are now hard-working members of the Vane fleet,” Hughes said. “The Delaware and her three sister tugs (built by SJSB) bring heightened performance, crew comfort and safety to the ocean-service towing sector. We look forward to more of the same from the four remaining tugboats being delivered by St. Johns later this year.”

St. Johns Ship Building
SJSB boasts a line of sub-25 foot tugboats with a variety of custom packages that makes them an extremely attractive product for a variety of barge operators, marine construction companies and inland-waterway transients. Two of these custom-built twin-screw push tugs, the Lady Shayne and the Lady Dashelle, for Smithbridge of Brisbane Australia. These 25-ft tugs feature twin John Deere model diesel engines with a combined rating of 600hp and conventional shaft drives with reversing gears.

“The Lady Shayne and Lady Dashelle will be assigned to a very high profile marine construction site in Botany Bay in Sydney, Australia where a new bulk liquid terminal is being built to accommodate tankers,” said Ron Mason, Marine Operations Manager and New Construction Projects Manager for Smithbridge.

With these tugs, Smithbridge can adapt various kinds of utility equipment to the front of the vessel for different project requirements, “thanks to the excellent job St. Johns did in developing our hydraulic anchor handling frame for the front,” said Mason. The Shayne and Dashelle will handle the 160-ft by 80-ft piling barge as it goes through the piling process for the terminal.

Although SJSB has attempted to expedite builds and routinely starts new 25 foot tugs on spec, there has not been any that have been completed prior to a customer purchasing the future product. In addition to these newbuilds, St. Johns Ship Building will begin work on a second pair of identical tugs, as well as a pair of 39-ft truckable tugs, for Smithbridge.

The vessel has 6,400 square feet of cargo space and a two-story deckhouse for crew quarters, passenger accommodations and a galley. The wheelhouse and captain’s quarters are on the second deck. Grand Master II is the first of three 190-foot landing crafts the shipyard is building for Caribbean customers.

As part of an ongoing process to ensure that the Vane Brothers fleet remains as safe, modern, and productive as possible, work has wrapped up on another new articulated tug/barge (AT/B) unit and other purpose-built vessels are scheduled for delivery in the next few months. The 100-foot-long, 4,200-horsepower AT/B tug Jacksonville was completed at St. Johns Ship Building. Originally envisioned as a traditional hawser tug, the Jacksonville was modified while under construction to become a more modern AT/B tug.

Vane Brothers Port Captain Jim Demske explains that the modifications primarily included the elimination of the double-drum towing winch, tow span, and deck sheaves in favor of an innovative Beacon Finland JAK-400 Hydralok AT/B coupling system. A custom-built Schoellhorn-Albrecht accommodation ladder is being used for access between the tug and barge. A second tug modified for AT/B, the New York is getting ready for launching at St. Johns Ship Building.

As SJSB looks forward to successfully completing these projects and moving forward to even more challenges in the future, SJSB’s signature quality and customer relationships have developed as the Hallmark of its business. And, that’s a pretty good place to start – and finish – your next project.

Rick Eyerdam is an award winning journalist and editor. Formerly, he was Editor of Florida Shipper Magazine. Additionally, he was Executive Director of the Miami River Marine Group and Captain of the Port of the Miami River. He is a graduate of Florida State University with majors in English and Government. His articles have appeared in myriad shipping magazines and newspapers since 1970. 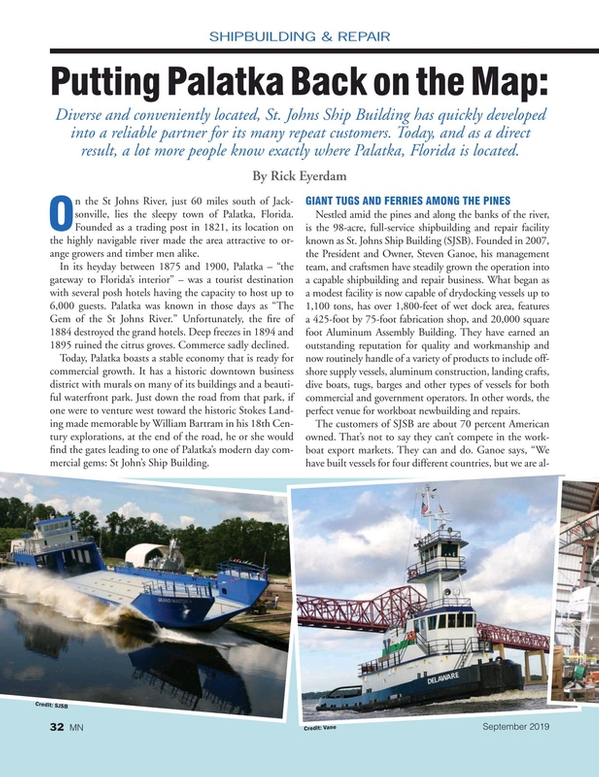 Read Putting Palatka Back on the Map in Pdf, Flash or Html5 edition of September 2019 Marine News