MetalCraft Marine’s 10 Meter Interceptor model is a formidable workboat. Defined by the sum of its myriad parts, it really can be seen that ‘the equipment makes the boat.’ This month, we ask "What's in Your workboat?"

In a business where there is rarely any shortage of pretty boats, cutting edge designs and equally impressively performing workboat tonnage, it is also true that the real value to any design is cemented by the very equipment that makes it run. Typically, however, comparing apples to apples when it comes to selecting your next patrol, fire, SAR or pilot boat is almost impossible. Until now.
Kick the tires. Pop open the hood. Put this one up on the jacks. Spend a little time under the chassis. The MetalCraft Interceptor line has been around since 2013, proven time and time again, and the firm has more than 50 orders – coming and already delivered – of this versatile craft that comes in various sizes from 7 to 12 meters. Their newest entry, the Interceptor 10M is the first stealth-designed high-speed small craft for Navies, Coast Guards and Police agencies. It is maneuverable, rugged and reliable, and suited to a wide range of applications like search and rescue, special operations, and patrol.

Window Shopping
According to MetalCraft, the most critical aspect of any workboat for the prospective operator, is good application engineering. Putting the right equipment together is what MCM's design team is all about.

The latest addition to the MetalCraft Interceptor line is the 10M Fast Attack cabin model. MetalCraft partnered with a number of key OEMs to bring about a next gen ‘Modern Work/Patrol Boat.’ The boat features 6’10” in headroom in the cabin and 5’11” headroom to allow for helmeted crew heights and roll up Eisenglass sides or any version of metal sides/aft wall. The cuddy can be set up with twin berths, galley and head.

The Interceptor 10M standard configuration at a glance …

Under the Hood
So, what makes up this version of the 10M Fast Attack cabin model? Go ahead; check under the hood for yourself:

Impressively Equipped, Off to a Hot Start
MetalCraft Marine was born in 1987 and has continually grown throughout the years, carving out a strong niche in the North American commercial boat industry. MetalCraft introduced the ten year hull warranty in 1987 for commercial boats and now, that standard is becoming a requirement on most government procurements. A GSA approved supplier since 1996, MetalCraft has specialized in world-class, high-speed fire and crew boats for over 30 years.

MetalCraft’s Interceptor Line introduced in 2013 … history at a glance

The Interceptor line has allowed MetalCraft to greatly expand its product range into the tactical and enforcement communities. The USCG Long Range Interceptor, an 11 boat contract for high-speed interdiction, enforcement, and SAR missions, started the transition into this new market. Since the LRI development, and the successful delivery of 19 9M Interceptors to two elite military groups, the line has grown rapidly in popularity and success. With fireboats at its very roots, the firm has continued to integrate fire systems into its Interceptor boats, allowing for greater mission capability. As the popularity of this type of hull increases – within MetalCraft and its many competitors – the need for multi-mission capabilities has also grown.

MetalCraft set out to build the most mission capable boat, that is configurable to meet the needs of a vast array of end users, yet was cost effective to customize and construct. The 10M Fast-Attack Interceptor, as exhibited at this year’s Multi-Agency Craft Conference (MACC), is modular, actively configurable, and, as noted above, is chock full of impressive equipment.

The 10M Fast-Attack Interceptor demonstration platform has been in the water since July 2018, and traveled from northern NY State where it was built, on to Brunswick Commercial and Government Products’ facilities for a number of upgrades, before heading to the 2018 Workboat show. There, in New Orleans, scores of potential buyers will kick the tires. And, within the pages of this edition of MarineNews, you’ve already beaten them to it.

This article first appeared in the November print edition of MarineNews magazine. 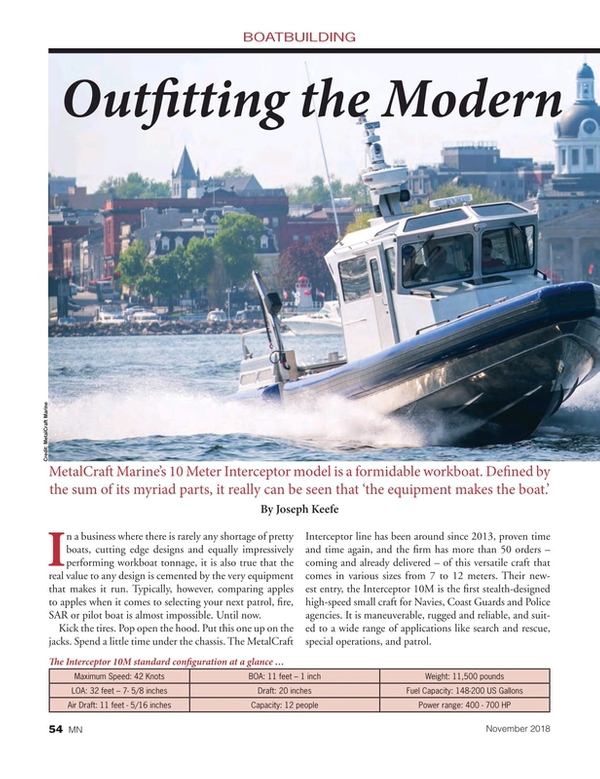