Read this page in Pdf, Flash or Html5 edition of May 2018 Marine News Magazine 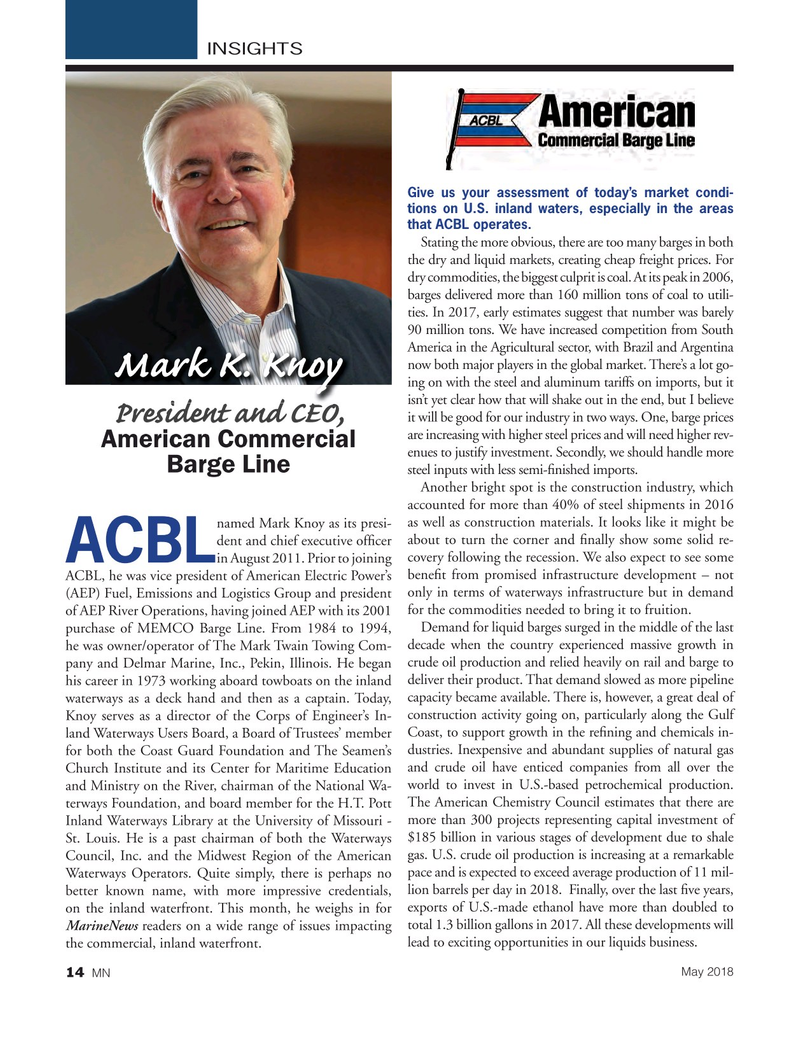 Give us your assessment of today’s market condi- tions on U.S. inland waters, especially in the areas that ACBL operates.

Stating the more obvious, there are too many barges in both the dry and liquid markets, creating cheap freight prices. For dry commodities, the biggest culprit is coal. At its peak in 2006, barges delivered more than 160 million tons of coal to utili- ties. In 2017, early estimates suggest that number was barely 90 million tons. We have increased competition from South

America in the Agricultural sector, with Brazil and Argentina now both major players in the global market. There’s a lot go-

Mark K. Knoy ing on with the steel and aluminum tariffs on imports, but it isn’t yet clear how that will shake out in the end, but I believe it will be good for our industry in two ways. One, barge prices

President and CEO, are increasing with higher steel prices and will need higher rev-

Another bright spot is the construction industry, which accounted for more than 40% of steel shipments in 2016 named Mark Knoy as its presi- as well as construction materials. It looks like it might be dent and chief executive of? cer about to turn the corner and ? nally show some solid re-

ACBL in August 2011. Prior to joining covery following the recession. We also expect to see some

ACBL, he was vice president of American Electric Power’s bene? t from promised infrastructure development – not (AEP) Fuel, Emissions and Logistics Group and president only in terms of waterways infrastructure but in demand of AEP River Operations, having joined AEP with its 2001 for the commodities needed to bring it to fruition.

purchase of MEMCO Barge Line. From 1984 to 1994, Demand for liquid barges surged in the middle of the last he was owner/operator of The Mark Twain Towing Com- decade when the country experienced massive growth in pany and Delmar Marine, Inc., Pekin, Illinois. He began crude oil production and relied heavily on rail and barge to his career in 1973 working aboard towboats on the inland deliver their product. That demand slowed as more pipeline waterways as a deck hand and then as a captain. Today, capacity became available. There is, however, a great deal of

Knoy serves as a director of the Corps of Engineer’s In- construction activity going on, particularly along the Gulf land Waterways Users Board, a Board of Trustees’ member Coast, to support growth in the re? ning and chemicals in- for both the Coast Guard Foundation and The Seamen’s dustries. Inexpensive and abundant supplies of natural gas

Church Institute and its Center for Maritime Education and crude oil have enticed companies from all over the and Ministry on the River, chairman of the National Wa- world to invest in U.S.-based petrochemical production. terways Foundation, and board member for the H.T. Pott The American Chemistry Council estimates that there are

St. Louis. He is a past chairman of both the Waterways $185 billion in various stages of development due to shale

Council, Inc. and the Midwest Region of the American gas. U.S. crude oil production is increasing at a remarkable

Waterways Operators. Quite simply, there is perhaps no pace and is expected to exceed average production of 11 mil- better known name, with more impressive credentials, lion barrels per day in 2018. Finally, over the last ? ve years, on the inland waterfront. This month, he weighs in for exports of U.S.-made ethanol have more than doubled to

MarineNews readers on a wide range of issues impacting total 1.3 billion gallons in 2017. All these developments will the commercial, inland waterfront. lead to exciting opportunities in our liquids business.