In a world where small to medium sized municipalities and port authorities have to make every dollar go a long, long way, any opportunity to leverage just one hull over multiple mission sets grabs a lot of attention. Nevertheless, Job 1 on that set of requirements is arguably the need to provide robust firefighting capabilities. Sure, everyone would like to have the ability to pump 15,000 gallons per minute (gpm), but at the same time, not everyone can afford it. Nor does everyone have the available draft to support such a (larger) platform. For those narrow work parameters, limited budgets and long list of mission requirements, there is, quite simply, the Moose Boat Fire Rescue Catamaran.

Firefighting 101
Traditional firefighting  vessels typically couple the firepump to one of two engines. When that happens, these monohull designs lose about one-half of their design speed, power and stationkeeping ability when they drop one engine to pump water. Moreover, at this point in the emergency, the risk of loss of redundancy in terms of what happens if the boat loses an engine, is very real. In that scenario, the response vessel would either lose control or, conversely, the ability to fight the fire. Of course, the vessel could also tie up to the pier and pump water ashore if the emergency involved a land-based fire, but that option isn’t always available.
The ideal firefighting scenario, therefore, involves a vessel that can maintain full control and redundancy, with shallow enough draft to get into the toughest spots, all with a robust water output for the size of the vessel employed. That hull should also be able to double as a rescue vessel and be able to perform several other municipal response missions, as well. In a nutshell, that’s the Moose Boat M2 Fire Rescue Catamaran.

The Moose Solution
During discussions with prospective clients in 2011, Moose Boats recognized that the key vessel requirements for firefighters with marine responsibilities, given the diverse range of scenarios they encounter, were mostly present in their existing designs. Moose Boat’s Mark Stott explains, “Our client’s ideal boat was a compact, multi-mission craft with high water flow capacity, exceptional maneuverability, recessed decks with minimal level changes, lateral stability, shallow draft, beaching and heavy weather capabilities. Our already proven M2 diesel/water-jet propelled catamarans met all of the criteria with the exception of sufficient firefighting water flow.” Moose Boats, he said, realized the challenge was to exceed the firefighting requirements without sacrifice to deck layout, performance or maneuverability.
Partnering with Logan Clutch and Cummins to ‘co-engineer’ a solution, the application was designed and eventually approved. The collaborative effort, as it turned out, was a ‘win-win’ for everyone. Moose got the multi-mission, robust designs that their clients were seeking and the design arrangement has since been crafted by  the engine and power suppliers to their client in a myriad of other applications, including fishing vessels, for example, that typically require a lot of hydraulic power for winches, etc.
With the requirement of a fire pump engagement with the option of simultaneous propulsion from both Hamilton jets to maintain maneuverability, Moose Boats decided that a FPTO (Front-end Power Take Off) from each Cummins QSB6.7 425hp engine to drive two individual fire pumps was the only viable option within the relatively narrow catamaran demi-hulls. Identifying Logan Clutch Corporation as the manufacturer of the pneumatically actuated clutch to interface the engines and fire pumps, Moose sought approval of the previously unavailable FPTO application from Cummins engineers. The project came to life in 2012 in a joint meeting that included Cummins, Logan Clutch, Moose Boats and West Pierce Fire and Rescue, the agency to take delivery of the first Moose Boats M2-37 Fire Rescue Catamaran to implement the application in 2013.
Mark Stott describes the unique arrangement, saying, “Cummins, Logan and Moose collaboratively engineered the now proven FPTO design, which employs two Hale fire pumps ‘manifolded’ together to achieve 2,750 Gallons per minute of flow while maintaining full maneuverability. The ability to maintain sufficient thrust via both of the (Hamilton) propulsion jets is essential in firefighting scenarios for maneuverability and station-keeping while counteracting considerable nozzle reaction in tight marinas or in open water. The M2 catamaran is also capable of supplying water to land based apparatus while dockside with the propulsion disengaged, or while holding station with propulsion engaged. The fully independent fire pump engagement and dedicated sea chests for water supply offers firefighting redundancy with a single pump flowing over 1,500GPM.” In general terms, the Moose engineered solution increases water delivery capacity from 900 to 2750 gpm, for this size of vessel.

Value and Utility
Larger industrial ports, with expanded CAPEX budgets and better access to federal port security grants – the nexus of many fireboat acquisitions – have the need for larger hulls with pumping capacities that can and do approach 15,000 gallons per minute. But, not every municipality can afford the price tag, nor do they need the capacity or a vessel that is outsized for the local purpose. On the other hand, the Moose Boats M2-37 Fire Rescue Catamaran appeals to smaller agencies that need a multi-mission hull, shallow draft, a rescue system and one that can get to places where there is no hydrant.
Marina fires often present particularly difficult challenges for a larger boat to maneuver and apply water flow to the source of ignition. And in places like West Pierce, Washington, the need to beach the boat in obscure areas is a necessary option. Delivering robust water flow to a land based firefighting assignment, the boat takes suction from the stern area, which remains unfouled and on the offshore side. According to Stott, 2,750 gallons per minute is “middle of the range” water output for a firefighting boat, but, he says, “For the size of the 38’ craft, it is quite robust.”
On the water today, there are, in truth, not too many catamaran firefighting vessels. But, the wide separation between two propulsion units in the twin hulls, coupled with the jet propulsion, offers unmatched stability, full redundancy, and two completely separate firefighting systems. If one fails, then another is available. A typical equipment list might include a navigation and electronics suite comprised of Furuno NavNet3D, L3 Secure Maritime AIS, ICOM, Motorola and Firecom Communications and FLIR Thermal Imaging equipment.
In the end, the stable Moose catamaran design employs twice the equipment and is a more expensive way to build the boat, but at the same time, provides ‘best in class’ firefighting performance at this size of boat. Unlike some monohull arrangements, there’s simply no need to drop one engine from propulsion to provide firefighting capabilities to keep the same performance. Finally, all of that capacity, equipment and capability doesn’t affect crew capacity and cockpit configuration. Stott adds enthusiastically, “All machinery is below deck. If you are using the vessel for rescue – you want that deck unencumbered – this design does that.”

In the Water & Building More
Subsequent to West Pierce delivery, Moose vessels with similar arrangements have been delivered and are currently in service with Sandwich Fire in Massachusetts and Richmond Fire in California. Another is currently under construction for Bellingham Fire in Washington. Beyond this, Moose Boats is reportedly in discussions with several other firefighting agencies nationwide regarding both its M2 design, as well as the larger M1 (4,000gpm) Fire Rescue Catamaran.
Looking beyond the fireboat market, Moose Boats also builds unique, functional, rugged boats ranging from 33 to 46 feet (LOA) for a wide range of uses including commercial, law enforcement, firefighting and government markets. All welded aluminum construction provides a strong, lightweight, as well as corrosion and impact resistant hull, exhibiting exceptional stability and superior sea keeping capabilities. When it comes to firefighting boats, however, this isn’t their first ‘rodeo.’
Moose has constructed numerous fire fighting vessels for agencies throughout the United States including Richmond Fire Department, Tiburon Fire Rescue District, San Francisco Fire Department and Humboldt Bay Harbor Recreation and Conservation District in California, Old Saybrook Fire Department in Connecticut, Lewes Fire Department in Delaware, Anne Arundel County in Maryland, Massport Fire Rescue at Boston Logan Airport and Sandwich Fire Rescue in Massachusetts, Northport Fire Department in New York, New Jersey State Police, North Kingstown Fire Rescue in Rhode Island and West Pierce Fire Rescue in Washington.
For the smaller fireboat niche, Moose combines quality, robust pumping capacity, a stable platform, multi-missioned hull(s), and affordability for small municipalities. Mark Stott says simply, “That really is the core of the concept and it has been well received. Everywhere we’ve delivered a boat, several more opportunities have arisen.” For many municipalities, as previously described, the well equipped M2 Fire Rescue Catamaran retails for under $1 million. Summing it all up nicely, Stott adds, “The M2 is a high powered boat for that price point.”

(As published in the September 2014 edition of Marine News - http://magazines.marinelink.com/Magazines/MaritimeNews) 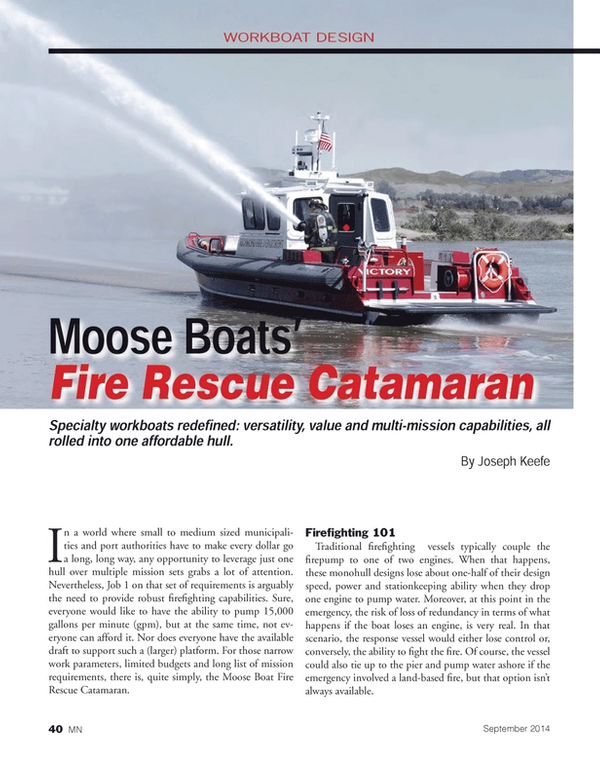