Is Your Crew Really Prepared?

If you think training is expensive; try ignorance.

In the ensuing years following the Exxon Valdez disaster, the maritime industry has made great strides in training mariners to prepare for, respond to and mitigate a multitude of emergencies aboard vessels. For example, the environmental performance of the marine industry itself has all but eliminated much of the oil that formerly entered the water through marine error or equipment failures. Nevertheless, the incidents with vessels that do occur, large and small, bring into question the effectiveness of the training.
A fire aboard a vessel can be a nightmare. That’s because a firefighter ashore, in certain circumstances, can fight a fire defensively; that is from outside the structure. Mariners can’t do that, so their choices are limited – use the tools they have to combat the fire or abandon ship.

The Best Fire is No Fire
When I taught fire safety for commercial fisherman in Seattle, one point I always stressed was that the best way to fight a fire is not to have one. As obvious as this seems, it’s very important and the key to safety at sea. Studying the accident reports published by the USCG or the NTSB makes it clear that human error can be attributed to the causation of most incidents. Deferred maintenance, poor housekeeping, failure to follow guidelines and complacency are key factors in the causes of any marine incident including fires.
Once a fire starts, crews are instantly playing catch up. Early detection and alerting are important to reduce the time needed for a fire to grow.  Smoke alarms should be tested and maintained as well as engineroom alarms or other fire detection systems.

This is Not a Drill
When the alarm is sounded it’s time for training to kick in. Has your crew trained on the equipment provided to them?  Are they proficient in all aspects of its use?  A good example of this occurred recently when a student demonstrated the proper way to don a self-contained breathing apparatus (SCBA) but then did not know how to change out the air cylinder when it was exhausted. Lack of proficiency in this crucial step can cause lost time in a rescue effort or a fire attack that may change the outcome of the event.  Drills should include all elements of the natural progression of a fire emergency, like changing out air bottles.
A fire, even a small one, aboard a vessel will produces lots of acrid, choking smoke that will quickly reduce visibility possibly throughout the entire boat. If your vessels are equipped with SCBAs, then ensure that crews train in using them in limited or zero visibility. Can they don them quickly in the dark? If your vessels do not have SCBA, can your crews escape in zero visibility?
One of the best firefighting tools, and maybe the only one, on your vessels are portable fire extinguishers (PFE).  A PFE has the ability to control a wide range of fires, as most are rated for Class A-B-C fires if used properly. To learn the capabilities and limits of PFE’s there is only one sure way to train and that’s live fire training. What comes out of the extinguisher nozzle and how it impacts the fire is best learned in hands-on training on the actual type of fires encountered onboard. Firefighters are often chided for running in to burning buildings when others are running out. They do this because they also know the capabilities of the tools that are being brought to bear on the fire; the hoses, ladders, axes etc. The knowledge and confidence comes from experience but also from training and task repetition. The same training and task repetition can help mariners when they face the challenge of a fire onboard.

Specific Pre-Incident Planning
Crews should discuss where fires can occur on the vessel and then plan how they will respond.  Ashore, this is known as pre-incident planning and most fire departments perform them for potential responses. For example, a fire in the engine room will cause what to happen? Which way will the smoke go? What if a crewmember is trapped and needs to be rescued? If crewmembers need to enter the engineroom, how long will it take to get ready and what else can be done during that time. Pre-incident planning should cover escape/rescue of any crewmembers in the space, isolating the fire, combating the fire by various means – PFE’s, hoses, fixed extinguishing systems and what the consequences of those actions will be. If you dump the fixed extinguishing system, what happens next?
Loss of propulsion can compound the incident and greatly magnify the consequences of the fire.
Pre-incident planning should also include looking at the big picture of an event. If a fire occurs in any given space what will happen to liferafts and other survival gear? Will you be able to get your survival suits and liferafts in the event of a fire in the galley? Take care of Plan B in case you have to shift gears and abandon the vessel.
When developing pre-incident plans, the next step is, of course, training. Live fire training gives mariners the hand-on knowledge and understanding of the tools they have available to them. Portable fire extinguishers are great tools, but if you’ve never used one on a real fire (and this means oil and wood, not propane) then you can’t truly understand its capabilities and limitations – both of which are crucial pieces of knowledge. The use of personal protective equipment (PPE) or fireman’s outfits is a big financial decision for any company.  The equipment is not “one size fits all” and it’s expensive. If worn properly, by trained personnel, they can make the difference in the outcome of an onboard fire.
The heat and toxic smoke produced by today’s construction materials can quickly overcome non-protected mariners in even a small fire like a waste basket in the galley or a pile of rags in the engineroom. The combination of SCBA and PPE can protect mariners and give them valuable time and safety when combating a fire onboard. Once again, training is the key to success with this equipment.  When a fire starts, that’s not a good time to discover that the crewman designated to wear the equipment has claustrophobia when they can’t see out of the face piece. Mariners should train on board with this equipment so they can learn the best way to use it but they should also be given the opportunity to train in live fire conditions. The heat, limited visibility and exertion found in live fire training will help improve a mariner’s confidence in the equipment they wear and use. It will also show them their own limits, which are more important than the limitations of the equipment.

Operators Have Tough Choices
As operators, vessel managers have tough choices. Training is expensive and so is the equipment necessary for that training. The requirements of STCW and 46CFR part 27 are minimal and don’t adequately prepare a mariner for an actual fire aboard a vessel. As an example, the CFR requires only that a mariner be able to don a fireman’s outfit and breathing apparatus, if equipped. It says nothing about being competent at the task or being able to accomplish the task in a given time frame. Your crew can (probably) comply with this requirement, but are they prepared?
Land based firefighters drill on these tasks until it becomes muscle memory and they can do it without thinking. Too often, though, a vessel manager will insist, “That’s fine, but my crew aren’t firefighters.” But, the reality of the matter is that once a fire starts aboard their vessel, they are firefighters. The fire doesn’t care about your level of training – it will burn until it’s stopped or it runs out of fuel.

Amortizing the Cost: It All Adds Up
Does the time and money invested in training payoff in a real event? The answer is a resounding “Yes.” A good rule of thumb is that every dollar spent on preparedness saves about four dollars in recovery costs, and that’s without a pollution event. How much does an oil spill cost your company? Crowley Maritime is one such organization that makes a considerable investment in its people and their training, to ensure their crews have the skills and confidence to mitigate shipboard emergencies.  Continued training onboard, beyond the regulatory requirements, will improve crew readiness and build the muscle memory needed to respond quickly.
Operators should continue to improve their training, but remember the adage that the best way to fight a fire is not to have one. An ongoing commitment to maintaining not only safety equipment but operational equipment and creating a culture that doesn’t tolerate complacency is the key to a safe operation. It’s the little things that can come together to create the conditions needed for a fire to start. If a fire does start, your crews will be playing catch up as they make the crucial decisions needed to cope with the incident. The tools and the training they have will make the difference. Start now by training to a standard in excess of simple compliance with the regulatory scheme.
Is your crew really prepared? What if they are not? 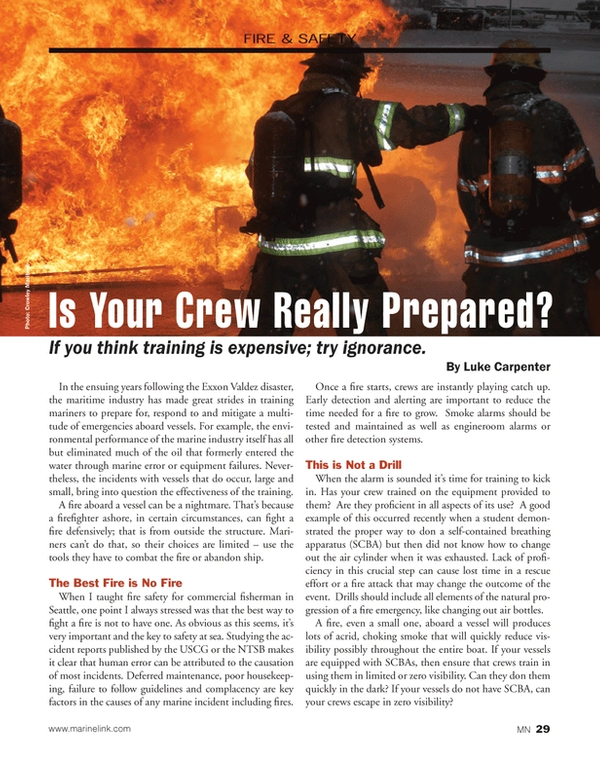 Read Is Your Crew Really Prepared? in Pdf, Flash or Html5 edition of February 2014 Marine News